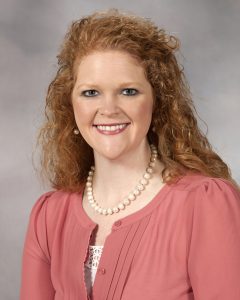 JACKSON, Miss. – Laurie Fleming, clinical associate professor of pharmacy practice at the University of Mississippi School of Pharmacy, has been recognized by the American Pharmacists Association. She will receive APhA’s 2017 Community Pharmacy Residency Excellence in Precepting Award.

The role of a preceptor is to mentor postgraduate student pharmacists in workplace situations. As part of the School of Pharmacy’s residency programs, Fleming, who is also a pharmacy practitioner, works alongside students and acts as a role model to teach skills needed to work in an ambulatory care setting.

In addition to this honor, Fleming was named the School of Pharmacy’s 2016 Preceptor of the Year by the pharmacy students. She has been a recipient of the school’s Teacher of the Year award four times. Previously, she served as president and association manager of the Mississippi Society of Health-System Pharmacists.

Dylan Lindsay, a previous resident of the university’s Community Pharmacy Residency Program, nominated Fleming for the award. In his nomination letter, Lindsay highlighted Fleming’s commitment to her patients, residents and the profession, saying that she embodied “professional commitment and leadership.”

“This award is an amazing honor and is a direct result of the outstanding residents that I have precepted over the past 10 years,” Fleming said. “Their successes have been the most rewarding part of my career. I am indebted to my students, my colleagues and my family.”

Fleming went on to say that winning this award challenged her to be a better preceptor for her students and residents.

“Our profession allows us the opportunity to improve the lives of patients, no matter the practice setting,” she said. “Making even a small difference is so very meaningful.”

“Laurie has demonstrated excellence in precepting, mentoring, leadership and administration of the residency program,” said Seena Haines, chair and professor of pharmacy practice. “She has endless energy and passion that is infectious to our students and residents. I truly appreciate her time and dedication to developing outstanding representatives of community practice.”

Fleming will receive the award at the APhA Annual Meeting and Exposition in San Francisco, March 24-27.