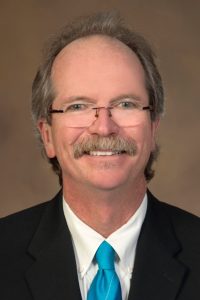 Dr. John E. Murphy of the University of Arizona College of Pharmacy.

The Nov. 4 lecture, “Pharmacy World Domination,” was presented at the Gertrude C. Ford Center for the Performing Arts. The School of Pharmacy and its Department of Pharmacy Practice sponsored this free event.

He earned his B.S. and Pharm.D. degrees from the University of Florida in Gainesville, and has published more than 200 papers, 100 abstracts, five editions of Clinical Pharmacokinetics and is co-editor of the Pharmacotherapy Self-Assessment Program.

Murphy has also served as president of the American College of Clinical Pharmacy, American Society of Health-System Pharmacists and Georgia Society of Hospital Pharmacists. Among his numerous professional and teaching recognitions are the Award for Sustained Contributions to the Literature of Pharmacy Practice from the ASHP Research and Education Foundation, the ASHP Whitney award, the ACCP Education Award and the Robert K. Chalmers Distinguished Teaching Award from the American Association of Colleges of Pharmacy.

The Coy W. Waller Distinguished Lecture series was established in 2004 to recognize the former director of the Research Institute of Pharmaceutical Sciences’ contributions to the field of pharmaceutics and the pharmacy school. Each year, a department within the school hosts the lecture, and lecturers are selected for their contributions to the host department’s discipline.

“The Department of Pharmacy Practice was very honored to have Dr. John Murphy as this year’s Coy W. Waller lecturer,” said Seena Haines, pharmacy practice chair. “He has made significant contributions to our profession through numerous accomplishments related to his academic career, clinical practice advancement and service to the profession.”