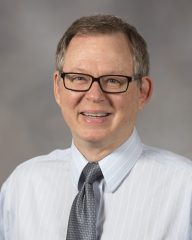 OXFORD, Miss. – Stuart Haines, director of the Division of Pharmacy Professional Development and professor of pharmacy practice in the University of Mississippi School of Pharmacy will receive with the Robert M. Elenbaas Service Award from the American College of Clinical Pharmacy (ACCP) for his service to the organization.

The award, named for the founding executive director of ACCP, is given to someone who has devoted exceptional time and energy to the organization, which works to advance clinical pharmacy. Haines was president of ACCP in 2006-07 and has served continuously in some capacity for over the past two decades.

“It’s truly an honor to be recognized by ACCP,” Haines said. “I’ve long admired Dr. Elenbaas. Not only was he an extraordinary practitioner and educator, but he was truly committed to advancing pharmacy as a clinical discipline. To receive an award named after him means a great deal to me.”

In addition to his work at the University and with ACCP, Haines is editor-in-chief of iForumRX.org, an online journal for ambulatory care pharmacy specialists, as well as a scientific editor for the journal Pharmacotherapy and for the textbook Pharmacotherapy: A Pathophysiologic Approach.

“Stuart is an incredible example of the power of professional service,” said David D. Allen, dean of the School of Pharmacy. “His dedication is not only an asset to the profession, but it demonstrates the value of service for our student pharmacists as well.”

Haines’ other accolades include an education award from ACCP, teaching awards from the University of Maryland and the University of Texas and recognition as a fellow and distinguished practitioner of the National Academies of Practice.

Haines will be recognized at the ACCP annual meeting in Hollywood, Florida on Oct. 23.