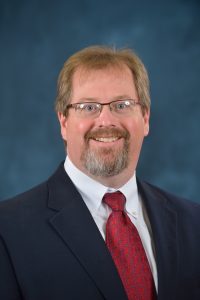 OXFORD, Miss. – The School of Pharmacy is delighted to announce that John P. Bentley, professor of pharmacy administration, is the recipient of the 2016 University of Mississippi Faculty Achievement Award.

At the fall faculty meeting on Friday, Aug. 26, Morris Stocks, UM provost and executive vice chancellor, called Bentley one of the university’s finest.

“His pharmacy research helps the world understand the roles that pharmacists play in medication therapy and how the medication consumption experience affects patients,” Stocks said. “His biostatistics research and proficiency have a direct benefit to our students, faculty and research scientists here at the University of Mississippi.”

Selection for the award is based on achievement in teaching, research, service and involvement in the classroom. Bentley came to the university in 1993 as a graduate student and a teaching assistant in the School of Pharmacy, becoming an assistant professor in 1998. Since then, he has received multiple awards for his service, teaching and research. 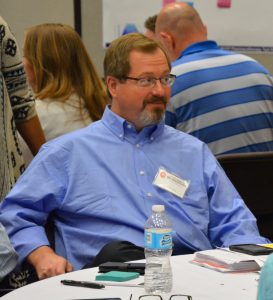 Bentley at a pharmacy school faculty-wide meeting in June 2016.

“I could think of no more deserving person for this award than John Bentley,” said David D. Allen, dean of the School of Pharmacy. “His contributions have had a tremendous impact on our school, from creating an engaging and supportive environment for students, to consistently enhancing health and patient care with his research. I am incredibly thrilled to call him a co-worker and a friend.”

Although Bentley is primarily a pharmacy administration professor, he holds a joint appointment in the School of Business Administration. He is actively involved in multiple university committees, as well as School of Pharmacy committees.

Bentley has a passion for advising graduate students, which earned him the Excellence in Graduate Teaching and Mentoring Award from the university’s Graduate School in 2014. He has served on over 100 thesis and dissertation committees, and routinely serves on committees outside of his department.

“He has been a mentor who has helped me find my passions, and be my own independent researcher,” said pharmacy doctoral candidate Sujith Ramachandran. “Several times during these past few years, it felt like he understood me better than I did myself.”

In letters of recommendation, Bentley’s colleagues past and present praised his aptitude for teaching, his contributions to the school and his dedication to the profession. Many anecdotes focused on Bentley’s pursuance of a second Ph.D. in biostatistics from the University of Alabama while teaching full time at the University of Mississippi, a commitment that required commuting between Birmingham and Oxford, as well as occasionally living in a dorm room.

“Nothing defines one’s thirst for knowledge quite as much as what he or she is willing to give up to obtain it, and this stood out to me,” said John Young, associate professor in clinical psychology. “I believe that John viewed this much like he views the process of science more generally, which was simply a logical step in a progression toward a goal. The difficulty of that step was irrelevant to him in the context of determining it needed to be taken.”

Students in the pharmacy school also detailed his dedication to their studies and educational experience. He is the faculty advisor for two pharmacy student organizations, and serves as an advisor for one of the school’s Professional Development Advising Teams.

“In the classroom, Dr. Bentley is an engaging and effective teacher,” said Jesse Bowen, pharmacy student body secretary. “He challenges students, but he always gives them the tools necessary to succeed.” 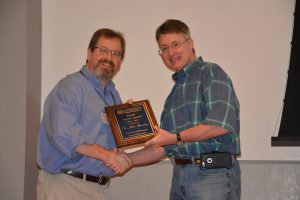 The Pharmacy Student Body honored Bentley with the Friend of the Student Award in both 2011 and 2014.

“From serving as the emcee at a philanthropic social event, to assisting students with service projects, to donating his time and food to make events successful, Dr. Bentley never disappoints,” said pharmacy student Lauren Daigle.

Since the Faculty Achievement Award was established in 1986, 10 of the 34 annual awardees have had full or joint appointments in the School of Pharmacy.

“So many outstanding individuals from across the university, including the School of Pharmacy, have received this award,” Bentley said. “It is truly an honor, and quite humbling, to be recognized in this way.”

Bentley credited the university, the School of Pharmacy and the Department of Pharmacy Administration for creating an atmosphere of commitment, passion and excellence that has inspired his own work.

“I am fortunate to work with truly outstanding students, collaborators and colleagues,” Bentley said. “These individuals are from my home department, the School of Pharmacy and also other departments across campus. They are intellectually curious, driven, creative, persistent, highly capable, people with high integrity, leaders and they also share with me a love of learning.

“I already receive so many intrinsic benefits from what I do, and to be recognized for work that one really enjoys doing is quite meaningful and very special,” he said.