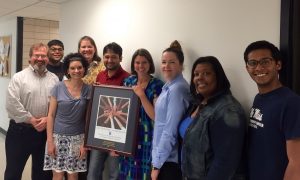 Faculty and students from the pharmacy administration department wrote letters of recommendation that outlined the department’s diversity initiatives.

OXFORD, Miss. – The department of pharmacy administration received the 2016 Excellence in Promoting Inclusiveness in Graduate Education Award at the doctoral hooding ceremony in May. The award, which includes $2,000 for the recipient to continue the inclusiveness efforts, was established by the University of Mississippi Graduate School in 2004 to recognize individuals or programs that demonstrate a strong commitment to promoting a diverse and welcoming environment in graduate education.

“I believe the faculty in the department [of pharmacy administration] set the tone and encourage openness to new ideas and cultures,” said Soumyajit Majumdar, associate dean for research and graduate programs in the Pharmacy School. “All students are treated with respect. With the leadership’s commitment to inclusivity and respect, students quickly adapt to this culture, which encourages the sharing of diverse ideas.”

In addition to a welcoming atmosphere, the department hosts regular events for members of the school to share food and holiday traditions from their different home countries, creating a culture that extends to the work and research of the department.

“It helps that some members of our program have research interests in understanding and addressing health care disparities, specifically with respect to medication use,” said John P. Bentley, professor of pharmacy administration. “These research areas often require an understanding of the issues surrounding important topics in health care such as the role of race, ethnicity, socioeconomic status, age, location, gender, disability status and sexual orientation.”

Going beyond faculty efforts, graduate students in the department of pharmacy administration work to foster open-mindedness, often sharing offices with students from other backgrounds and participating in a peer-mentoring program that smooths the transition for non-American students.

“As an international student myself, I can speak at length to the challenges of acculturation and toll it can take on a new student,” said Sujith Ramachandran, a pharmacy administration graduate student from India. “However, my acculturation process in the United States was made easy due to the familial atmosphere in this department.”