OXFORD, Miss. – One of the greatest strengths of the University of Mississippi School of Pharmacy is a diversity of backgrounds. Students and faculty members hail from all over the globe, bringing unique perspectives and life experiences.

For Tonia Aminone, a Ph.D. student in the Department of BioMolecular Sciences, that diverse environment was something she wanted to share. 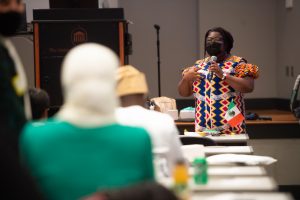 “The population at the school is highly diverse, and there is so much to learn as you meet people from different parts of the world,” Aminone said.

Aminone, who is from Delta State, Nigeria, wanted to learn more about her fellow students while sharing her own culture, but busy schedules can make it difficult to find time to get to know classmates. That’s where she decided to take initiative.

Aminone planned and hosted the school’s first Cultural Night in November. She previously planned a similar event as a student at Kwame Nkrumah University of Science and Technology, and wanted to bring that experience to Oxford.

“The aim of the event was to foster friendship, understanding, respect and collaboration among students, and to learn about the diverse cultures represented in the School of Pharmacy,” she said.

Aminone formed a committee of pharmacy graduate students and staff to assist with planning. Joining her on the committee were Tomayo Berida, Amelia Craze and Ben Sawyer, all students in the Department of BioMolecular Sciences, as well as Department of Pharmaceutics and Drug Delivery students Rasha Elkanayati and Tabish Mehraj.

Danielle Noonan and Sherrie Gussow, staff members in the Department of BioMolecular Sciences, also assisted with planning the event.

“They made planning this event less stressful and interesting,” Aminone said. “It was a pleasure working with every one of them.” 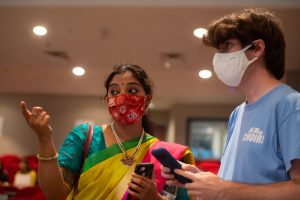 Big events like these need funding. Fortunately, the Division of Diversity and Engagement was there to help. Aminone applied for and received money from the Diversity Incentive Fund, which supports new and innovative approaches to improving diversity and inclusion at Ole Miss.

Kaylee Crafton, a graduate assistant for inclusive excellence and engagement, sits on the Diversity Incentive Fund committee. She said that Aminone’s event was a great reflection of the fund’s goal.

“It was evident that her proposed cultural night and food showcase had the real potential to create connections and foster community among graduate students from various cultures within the School of Pharmacy,” Crafton said. “Her event provided an opportunity for School of Pharmacy graduate students to gather, share their traditions and beliefs, and learn about each other’s cultures.”

Crafton also pointed out that the event was a great way for students to be social again after a year of remote learning due to COVID-19.

“While it’s always important to provide opportunities that offer this sense of inclusivity and connection, I think it was even more important that these students had the opportunity to safely do so after a year of physical, and often social, distance from one another,” Crafton said.

Aminone’s event was a great success. Students from nine countries made presentations about their culture, and attendees were able to sample delicacies from across the world. Students shared popular music from their countries and even taught some new dance steps.

Perhaps most importantly, the event gave students an opportunity to remind themselves of home, Aminone said.

“Bringing students from the various countries together not only allows them to experience new and diverse cultures without traveling, but to re-experience their own cultures and to enjoy the feeling of home away from home,” she said.