OXFORD, Miss. – Harshin Sanjanwala and Matthew Foster, both students with the University of Mississippi School of Pharmacy, were named honorees of the American Association of Colleges of Pharmacy Walmart Scholars Program.

The honor and accompanying $1,000 scholarship are given to recipients who are committed to a career in academic pharmacy. 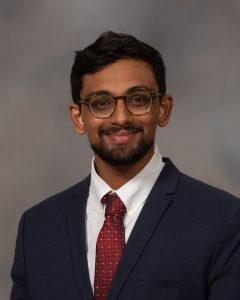 Sanjanwala is a native of Madison and fourth-year student pharmacist. He said that he first discussed the program with his mentor John Rimoldi, professor of medicinal chemistry and environmental toxicology, during his first year of pharmacy school.

“This has been something that Dr. Rimoldi and I have been discussing since P1 year,” Sanjanwala said. “I expressed my concern with not truly knowing what I wanted out of my career, and he told me about the AACP Walmart Scholars program after hearing about my teaching experiences.

“It was a really rewarding experience to finally be able to apply three years later and achieve that status with a professor that I was really fond of.”

Rimoldi said Sanjanwala is an ideal candidate for the program, praising his passion for learning.

“The AACP Walmart Scholars Program was a perfect fit for Harshin and undoubtedly will strengthen his commitment to an academic career,” Rimoldi said. “Harshin is the quintessential student-learner; he has a holistic view of pharmacy and education, a research-focused mindset, a collegial spirit and immerses himself in new experiences with confidence and optimism.”

Sanjanwala attended the AACP annual meeting in July, which was held virtually due to COVID-19. As an aspiring educator, he said the lessons learned will help to make him a better teacher.

“It was a nice look into teaching strategies that I hadn’t really thought about,” Sanjanwala said. “I also enjoyed meeting other like-minded students in the field.”

Foster, a native of Biloxi and also a fourth-year student pharmacist, has established himself as a budding researcher during his time at the School of Pharmacy. This year, he was awarded the Distinguished Citation for Outstanding Contribution to the Research Mission of BioMolecular Sciences as well as for Pharmacy Administration. 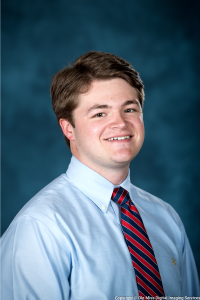 Foster said that being named a Walmart Scholar is a “great honor” and appreciated AACP’s recognition of his research contributions.

“I think a lot of time research is maybe overlooked or not understood,” Foster said. “Any time there is public recognition, especially by an organization composed of some of the most accomplished members of pharmacy academia, it is a great feeling.”

Nicole Ashpole, clinical assistant professor of pharmacology, is Foster’s mentor. She praised both his work ethic and passion for the pharmacy field.

“Matthew is an inquisitive researcher in the lab and in the classroom, so I was thrilled to hear of his selection for the program,” Ashpole said. “He has been actively engaging in conferences, webinar and networking events to learn more about careers in academia and pharmaceutical research, while continuing to progress his research in the lab and complete his pharmacy rotations.”

Foster also attended the AACP annual meeting and said he gained valuable education on how to create an inclusive environment for his peers and patients.

“I attended several sessions, mostly focusing on inclusiveness and cultural sensitivity for professors, students and patients,” Foster said. “They were very eye opening, and it was incredibly interesting to hear such varying perspectives and approaches on how to appropriately incorporate these practices into a learning environment to not just make patients feel more welcome, but also students and other professionals.”

The scholarships mark the 13th consecutive year that the School of Pharmacy had at least one Walmart Scholars honoree. Ole Miss recipients have earned the scholarship 15 of the 17 years it has been given.