OXFORD, Miss. – Hayley Prescott, a graduate student with the Department of BioMolecular Sciences at the University of Mississippi School of Pharmacy, has been named a recipient of the Anne S. Chatham Fellowship in Medicinal Botany by the Garden Club of America.

The fellowship, established in 1997, is administered by the Missouri Botanical Garden. Prescott received the award for her project, “Botanical Aphrodisiacs for Women’s Health.” She was awarded a $4,500 grant that will allow her to continue her research on botanical aphrodisiacs. 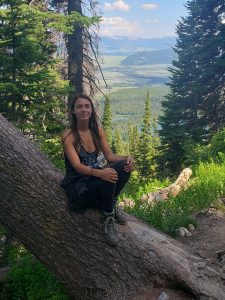 “While at the University of Mississippi, I have been focused on botanical aphrodisiacs and their applications in women’s health, specifically in female sexual dysfunctions,” Prescott said. “I have always been interested in the ‘why and how’ behind herbal medicine—why these plants have been used for all of this time and how they work.”

Prescott credited her adviser Ikhlas Khan, director of the National Center for Natural Products Research and distinguished professor of pharmacognosy, for encouraging her to find research projects that inspire her.

“Dr. Khan is an atypical advisor in that he let me have the freedom to pursue a project I was interested in and passionate about, and I am very appreciative of that,” Prescott said. “He has always led from a place of wanting us students to be independent in order to benefit our future careers.”

Khan praised Prescott’s ambition and creativity as both a researcher and student.

“Hayley has always been a free thinker and not afraid of handling challenging tasks, and her topic of research depicts that,” Khan said. “She is fun to work with, and I’ve been happy to have her as a group member.”

“Part of me wants to say that having a strong female mentor is extremely important in my development as a young scientist, but she is so much more than that limiting label,” Prescott said. “Dr. Ashpole is by far one of the best and hardest working mentors, leaders and scientists that we have here at the University of Mississippi.”

Prescott plans to put her education in action in the future, as she has an interest in policy work around dietary supplements or being hands-on through community work.

“I started off very doe-eyed wanting to change the world with my research and my degree,” Prescott said. “But the starting and end goal has really been the same, and that is my desire to help people.”