OXFORD, Miss. — The Microscopy and Imaging Center (MIC) at the University of Mississippi School of Pharmacy is an important resource for the North Mississippi region, providing access to one of the most advanced Scanning Electron Microscope (SEM) imaging services in the region. 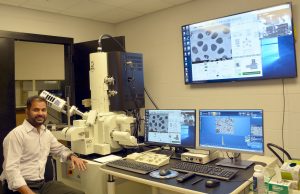 For Vijayasankar Raman, director of MIC and senior research scientist with the National Center for Natural Products Research, this has turned into a bit of an art form. As a botanist, the subjects of many of his images are plants. But he has also collaborated with others in and outside of the university to create images of a variety of objects, ranging from fish to fossils.

Raman has found that his images sometimes bear a striking resemblance to other objects in addition to displaying beautiful and characteristic ultrastructural features. That has motivated him to submit the images to the JEOL USA Image Contest, which picks a winner monthly.

“When you see a particular feature in a sample, you would know if it would make an exciting image,” Raman said. “For instance, a morphological feature (usually at micron or nanoscale) in the sample or an image may look like something popularly known.”

To increase his chances of victory, Raman adds some artistic flourish to his images.

“Scanning electron micrographs are originally grayscale (black and white) images.” said Raman. “Using suitable image-processing software, the images can be processed to add color and clarity without modifying their technical features. I use Adobe Photoshop to process and colorize SEM images.”

While presentation is key to winning these contests, Raman pointed out that the images must still be technically sound and demonstrate expertise in the craft.

“The JEOL team of applications experts who vote on the submitted images would weigh in on the beauty, creativity and various technical features of the images,” Raman said. “The quality of an SEM image depends directly on the quality of sample preparation and the microscope parameters used for imaging.”

Raman has twice won the contest. Winners of the monthly contest have their images featured in a yearly print calendar, and a grand winner is declared of the 12 monthly winners. Raman’s most recent win came in April 2021, so he’ll be in the running for this year’s top prize.

Take a closer look at Raman’s work below, and you might be surprised by what you see. 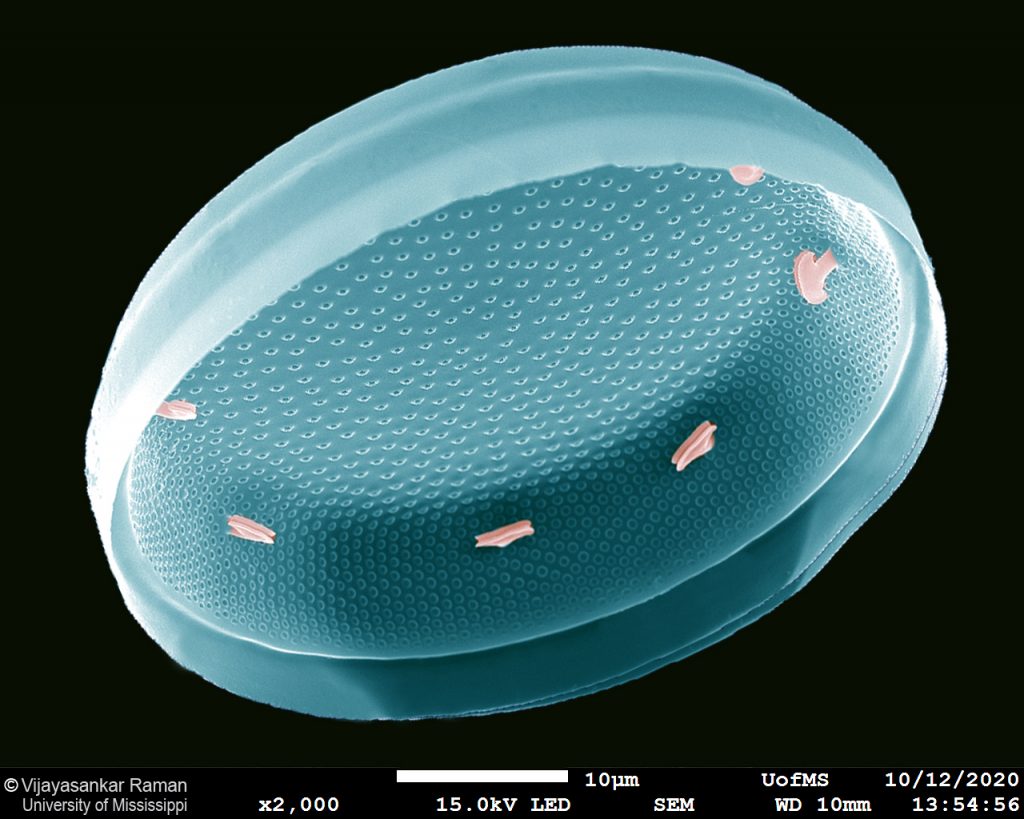 Raman’s newest winning image, “Unidentified Floating Object”, looks like a flying saucer that could be carrying some extraterrestrial visitors at first glance. This UFO, however, can be found underwater. The image is actually of a centric diatom, microalgae that live in oceans and other waterways. They also play an essential role in maintaining our oceans’ ecosystems, so relax, they come in peace! This image will feature in the JEOL’s 2022 calendar. 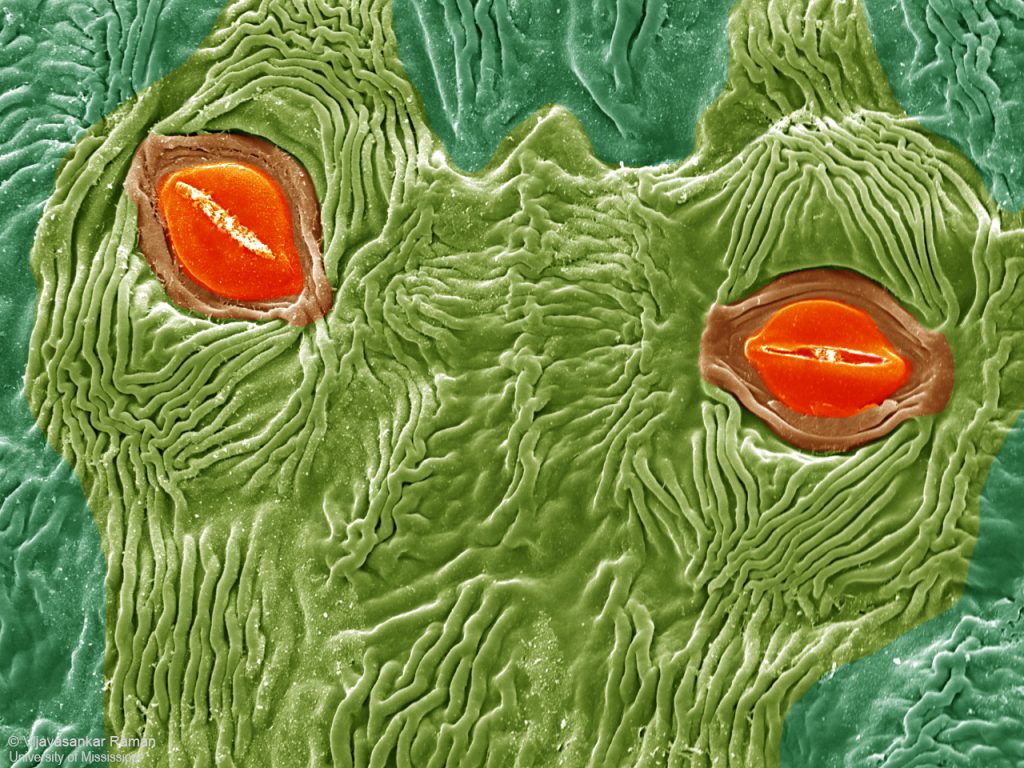 Is that an alien? Well, not quite, but it’s just as interesting. This image is actually of stomata found on the floral bract of a corpse flower being grown in the NCNPR medicinal plant garden. Stomata are small openings found on plants that allow them to take in carbon dioxide necessary for photosynthesis, and other gases. The oxygen we breathe is produced in part by photosynthesis, so this alien is definitely friendly. This image was also the winner of JEOL’s best image award in October 2019 and was included in JEOL’s 2020 calendar. 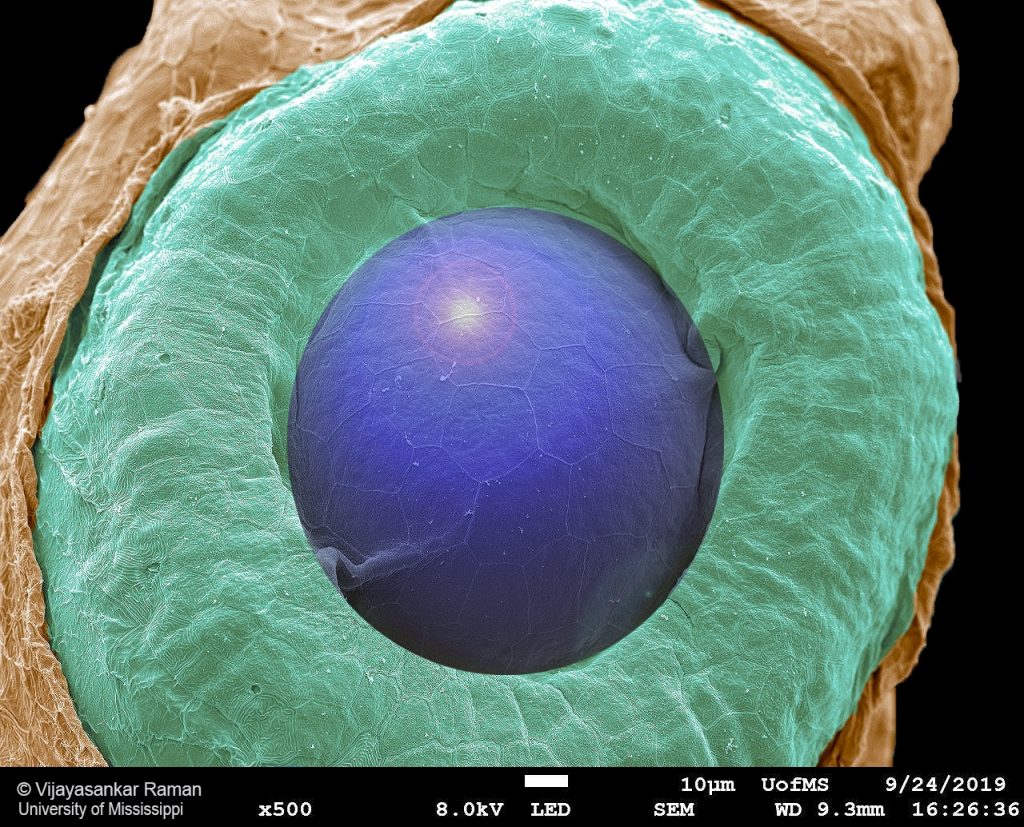 If this image looks like it’s staring back at you, that’s because it is. Pictured here is the developing eye of a zebrafish. According to Joshua Bloomekatz, assistant professor in the Department of Biology, this specimen was from an 18-hrs old embryo. The image has been colorized, so both the eyelid and pupil are easily visible. This image was a hit overseas, as Raman noted that it was featured in the German edition of the 2020 JEOL calendar. It’s also been shortlisted in the Royal Microscopical Society Scientific Imaging Competition, set to take place in July 2021. 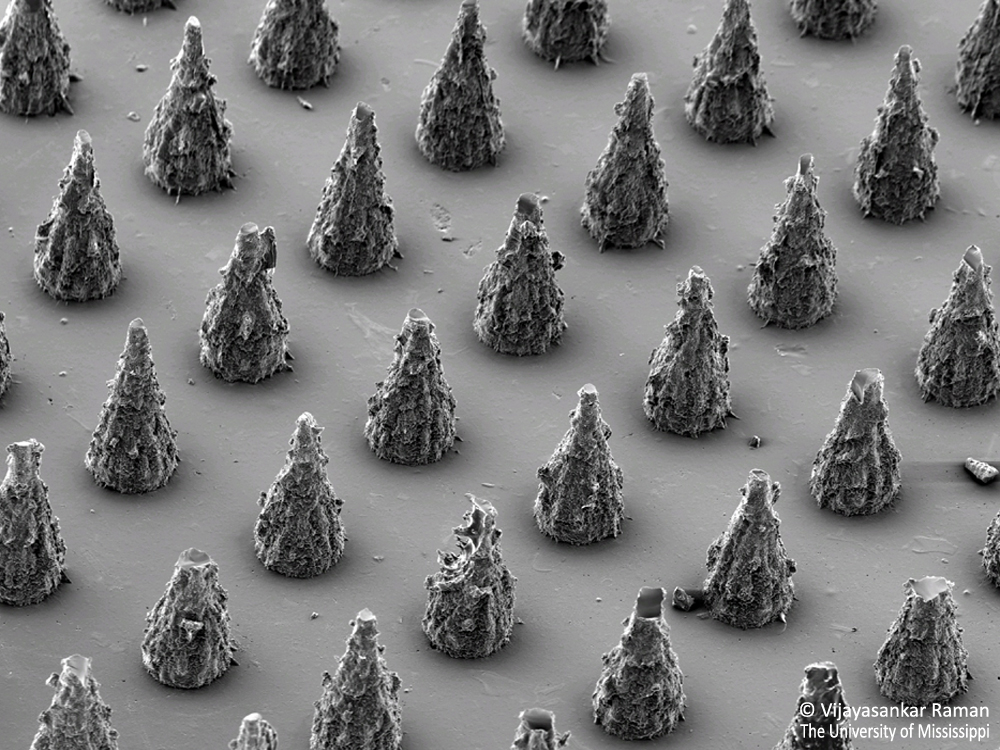 This “forest” is actually an array of soluble polymer microneedles prepared by the researchers in the Pharmaceutics Department. These microneedles are often used in transdermal drug delivery, which means the drug is delivered across the skin, often in the form of a patch. Polymer-based microneedles are especially helpful because they are biodegradable. 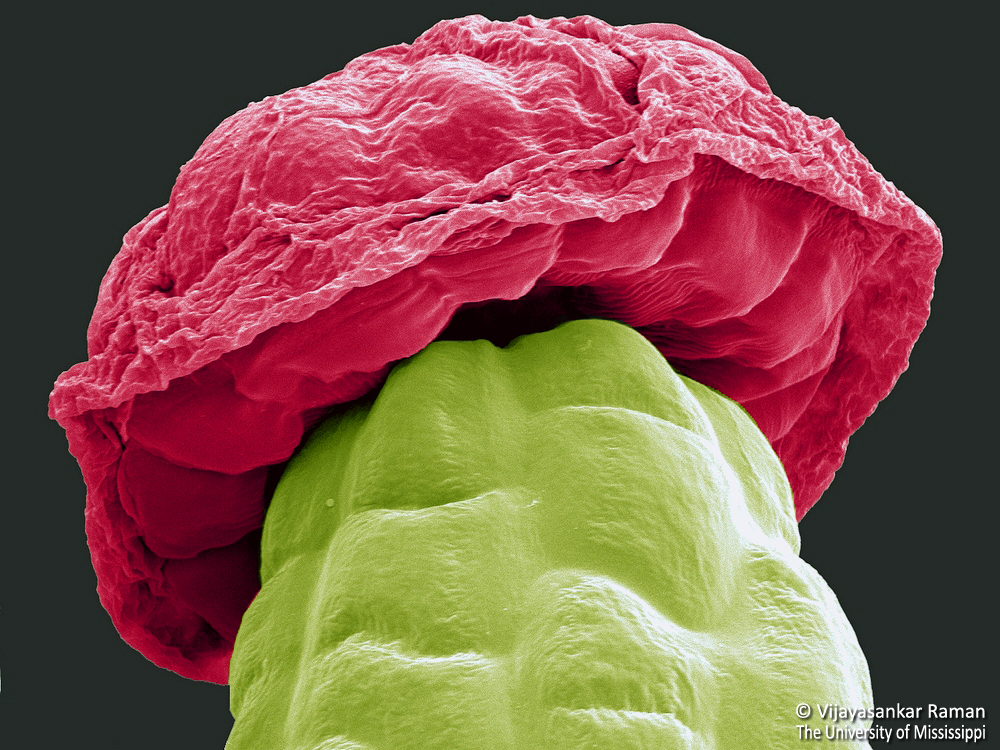 Pictured here is the trichome of a cannabis plant. The trichome would be visible as a tiny hair-like growth on the plant, so this image is highly zoomed-in. Raman said that the trichome is where most cannabinoids, such as tetrahydrocannabinol (more commonly known as THC) and cannabidiol (CBD), are found in a cannabis plant. 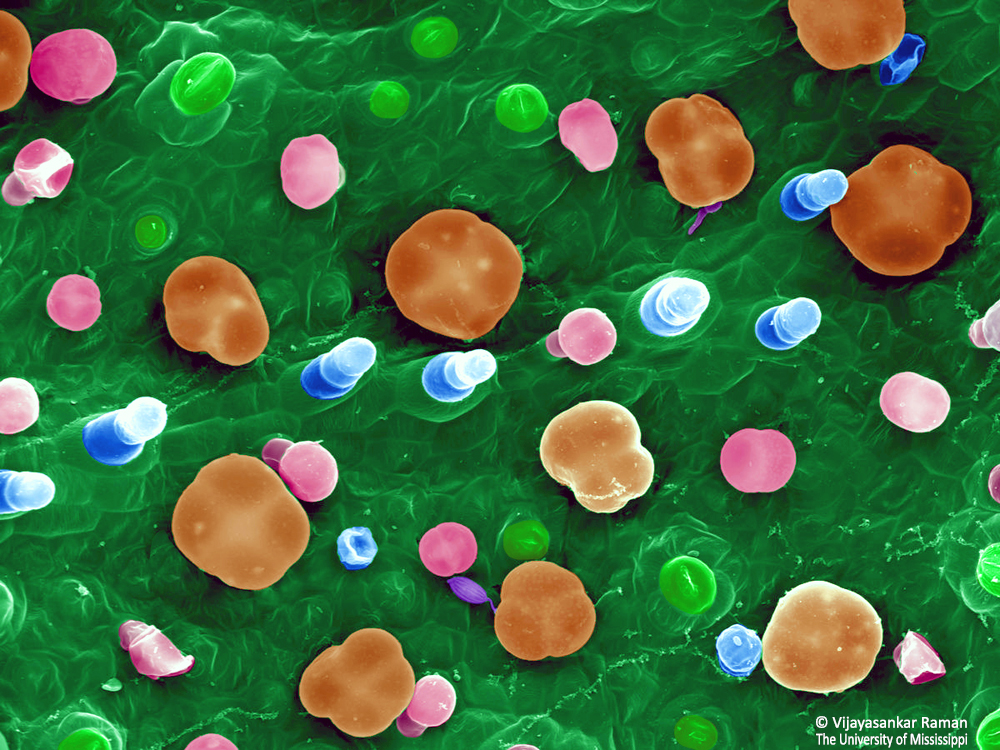 This colorized SEM image shows the various types of glandular trichomes present on the leaf surfaces of the psychoactive herb Salvia divinorum, commonly known as diviners’ sage. Salvinorin A and other compounds responsible for the plant’s hallucinogenic properties are biosynthesized and stored in these glandular trichomes. 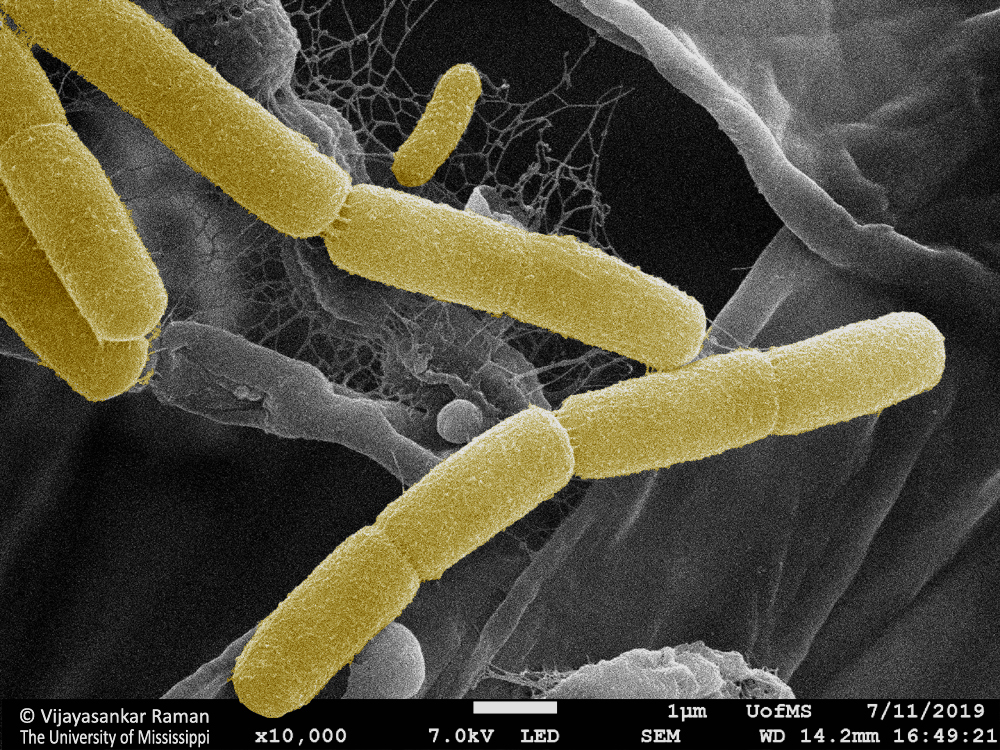 This image may not immediately remind you of anything, but it’s something you’ve probably heard of. This is a close-up image of the Escherichia coli bacteria, better known as E. coli. While most strains of E. coli are harmless, some can make people sick and have been responsible for some scary-sounding headlines about food recalls. 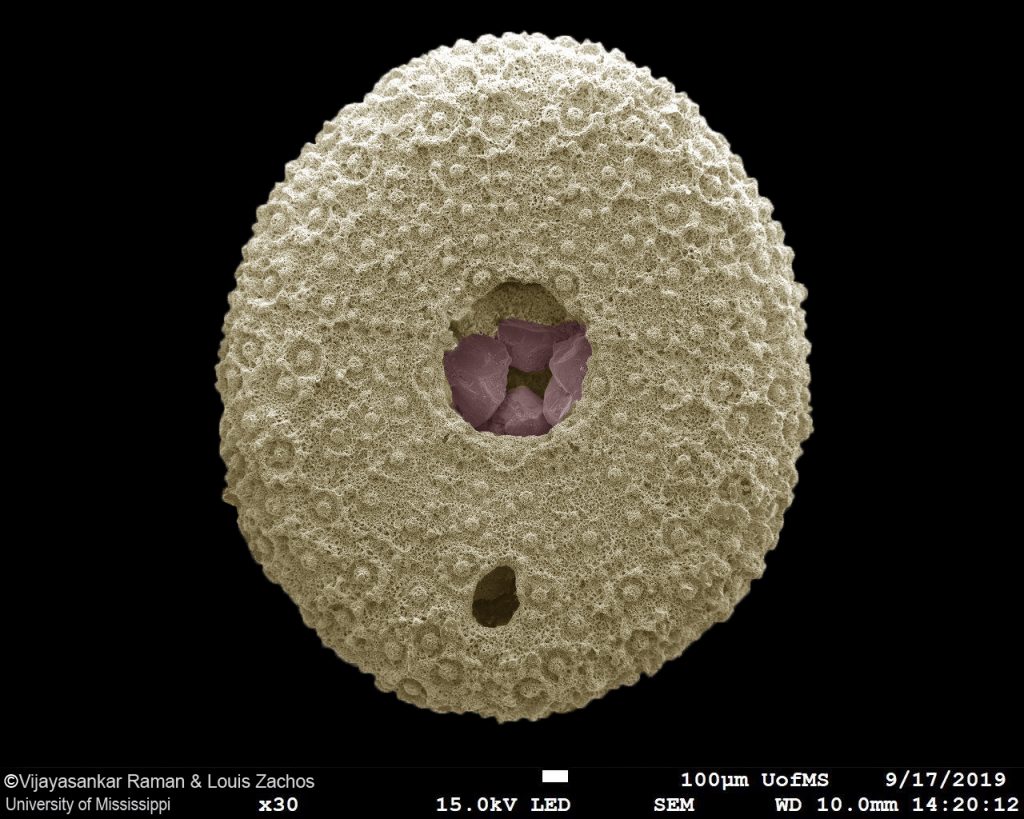 This image is of the oral side of a Periarchus lyelli echinoid fossil. You might know it by another name, however, the sand dollar. According to Louis Zachos, associate professor of geology and geological engineering at the University of Mississippi, this 245-million-years-old fossil was found at Shubata Creek in Clarke County, MS.