OXFORD, Miss. – David D. Allen, dean of the University of Mississippi School of Pharmacy, has been named recipient of the George R. Spratto Biological Sciences Distinguished Service Award, honoring his vision, service and contributions to the biological sciences and pharmacy education.

The award is presented by the Biological Sciences Section of the American Association of Colleges of Pharmacy. 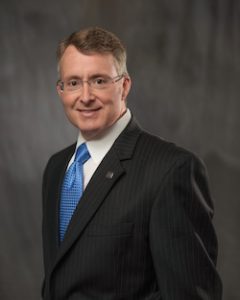 “This is truly an amazing honor,” Allen said. “George Spratto is a close friend and mentor, so to have my name and work associated with this award is very humbling. I feel immensely privileged to be a part of this group and association, as well as having great colleagues and students at the school who support these endeavors, so I’m very thankful for this recognition.”

Honorees must exemplify a commitment to the academy through personal example, collegiality, mentorship and leadership. Allen becomes the fourth awardee, as recipients are also recognized for their engagement and advancement of students.

Allen’s scholarly contributions of published articles and abstracts, along with his passion in sustaining a culture of excellence in education, make him a deserving winner, said Alok Bhushan, chair and professor of the Department of Pharmaceutical Sciences at Jefferson School of Pharmacy as well as chair of the Awards Committee.

“Dr. David Allen has made an outstanding contribution to pharmaceutical sciences and professional pharmacy education,” Bhushan said. “He has an expertise in several areas, including blood-brain barrier, Alzheimer’s disease and novel delivery methods like nano materials to the brain. He has been recognized with numerous awards and invited presentations for his contribution to pharmacy education and basic sciences.

“He stands as a pioneer for all educational disciplines and degrees of pharmacy schools.”

Allen will begin a new role as president of the University of Health Sciences and Pharmacy in St. Louis on July 1.

Since his arrival in 2012, the School of Pharmacy implemented a new curriculum, full accreditation was received from the Accreditation Council for Pharmacy Education and a new administrative structure was established with the creation of the Department of BioMolecular Sciences.

The school’s research enterprise has also flourished, as the school consistently ranks in the top 20 nationally for external funding. Allen oversaw the opening for the Thad Cochran Research Center West Wing that hosts a clinical studies suite, expanded NMR facility and the Natural Products Training Laboratory.

He’s an active member in numerous organizations and has served in various roles, including president of AACP and chair of the organization’s Biological Sciences Section.