OXFORD, Miss. – Wesley Sparkmon, a graduate student in the University of Mississippi School of Pharmacy, has been named 2020 Walmart Scholar by the American Association of Colleges of Pharmacy Walmart Scholars Program.

The honor and accompanying $1,000 scholarship are given to recipients who are committed to a career in academic pharmacy. 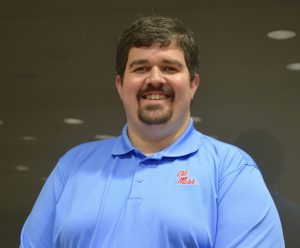 Sparkmon is a native of West Virginia and grew up in the Nashville, Tennessee, area. A Ph.D. candidate in the Department of Pharmacy Administration and 2012 graduate with a bachelor’s degree in pharmaceutical sciences, Sparkmon said it is a “tremendous honor” to be named a Walmart Scholar.

“I have both heard about and seen firsthand how competitive this program is, and it is a privilege to be named as one of only 65 Walmart Scholars nationwide,” Sparkmon said. “To be one of two representing the university this year is even more special as an Ole Miss alum.”

Sparkmon is a member of Rho Chi, Phi Kappa Phi and Delta Omega, the public health honor society. While receiving his Master in Public Health from the University of Louisville, he was awarded the Graduate Dean’s citation, as well as the Dean’s Award for graduate students from the School of Public Health and Information Sciences.

Erin Holmes, associate professor of pharmacy administration, served as Sparkmon’s faculty mentor. Sparkmon noted that she was instrumental in his academic and professional success.

“Since I first met Wes, his career goal has always been to be a pharmacy professor,” Holmes said. “I know this experience will further help support his career goals and that the networking opportunities will be invaluable to him. I look forward to seeing the great contributions that Wes will make to academia and the pharmacy profession in the years ahead.”

Sparkmon joined pharmacy alumnae Elizabeth Hearn on the Walmart Scholars list, giving Ole Miss 12 straight years with an honoree. Ole Miss recipients have earned the scholarship 14 of the 16 years it has been given.