OXFORD, Miss. – A first-year University of Mississippi student pharmacist presented her scientific research at the Society for Neuroscience’s international conference in front of thousands of the world’s top neuroscientists.

Gabby Hartman of Birmingham, Alabama, has had a passion for neuroscience since seventh grade, and now researches the effects of specific compounds on neuron regeneration after an injury. 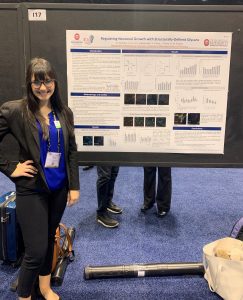 “Joining Dr. Nicole Ashpole’s lab opened my eyes to all the possibilities of neuroscience and I became incredibly interested in the field,” Hartman said. “It’s always exciting to go to the lab, continue conducting experiments and see if my results have greater implications to solve problems in neuroscience.”

Ashpole, Hartman’s research adviser and assistant professor of pharmacology, said that she had never before had an undergraduate researcher attend the conference, which hosts 30,000 neuroscientists from across the globe.

“When Gabby started working in our lab, she wanted to read and learn about her projects right away, in addition to doing the actual experiments,” Ashpole said. “Gabby showed that she was interested in the research and the principles behind what she was doing in our lab, which is both desirable and uncommon in a student researcher.”

Hartman first presented her research at the Mississippi IDeA Conference this past summer, where she won the Best Student Presentation Award. The conference showcases the best graduate and undergraduate research from across the state, and she was the only undergraduate neuroscience researcher to present her studies in a public platform talk.

The project is part of a collaboration between the research laboratories of Department of BioMolecular Sciences faculty members Ashpole, Vitor Pomin and Joshua Sharp, and is sponsored by the Center for Biomedical Research Excellence-Natural Products Neuroscience under its grant from the National Institutes of Health.