Gaston, a principal research scientist at Eli Lilly and Company, delivered the Joseph Sam Distinguished Alumnus Lecture on September 23 with a presentation titled “A Scientist Journey—Moments of Truth.” 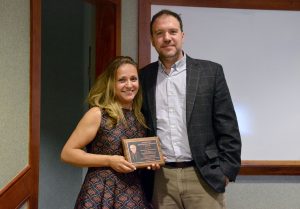 “I had a combination of feelings when I learned of this honor: surprised, thankful, happy and proud,” Gaston said. “Coming back to Mississippi is always enjoyable, but this time it was because of an honor that I could never have dreamed of.”

In her lecture, Gaston chronicled her academic and professional career from deciding to become a chemist in her home country of Brazil to gaining a job at Eli Lilly and Company. Gaston highlighted numerous important qualities of a successful scientist, including communication, which she learned as a UM graduate student.

Niloofar Khaje, pharmacology graduate student and president of BMS Student Advocates, spent the day with Gaston. Khaje noted that when alumni visit campus, they give her the courage to fulfill her dream so that she can make her supporters and future alma mater proud.

“Her lecture was very touching, and I could relate to her as a female immigrant and scientist,” Khaje, a native of Iran, said. “She was strong enough to overcome the difficulties of being an immigrant and fulfilled her dreams of being a successful scientist. She demonstrated to me that while I was not born here or to a rich family, I can still become successful with hard work.”

John Rimoldi, professor of medicinal chemistry and environmental toxicology at the School of Pharmacy, served on the award’s selection committee and knew Gaston was a perfect fit for the 2019 accolade.

“The committee was unanimous in selecting Dr. Alvim Gaston for this award,” Rimoldi said. “Her scientific accomplishments at Eli Lilly, coupled with her committed leadership and service to the discipline of medicinal chemistry, are inspiring and serve as a model for our future graduates.”

The award’s namesake, Joseph Sam, was an influential part in educating future scientists in the field of drug development and discovery. He served as one of the first chairs of the Department of Medicinal Chemistry, dean of the university’s Graduate School and vice chancellor of research. The Joseph Sam Distinguished Alumnus Award was created in 2009 to honor his inspirational spirit.