OXFORD, Miss. – University of Mississippi School of Pharmacy student pharmacists bowled for a cause on Tuesday, Oct. 9, as a group of them formed a team for the Bowl for Breath fundraiser to support the Cystic Fibrosis Foundation.

The team finished second overall in the fundraising competition for the most money raised, totaling $3,422. 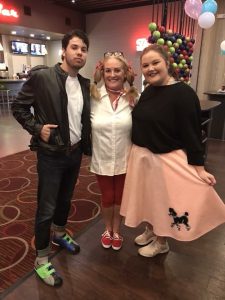 Student pharmacists raised money for the Cystic Fibrosis Foundation’s ‘Bowl for Breath’ event, which had a 1950’s theme. Photo submitted.

Second-year professional student Gaston Box, who serves as the student body’s interprofessional practice and education liaison, said a local resident’s son who has cystic fibrosis inspired the student pharmacists to participate in the fundraiser. Those diagnosed with cystic fibrosis have a buildup of mucus in essential organs, particularly in the lungs, which can cause breathing problems, and in the pancreas, which can cause digestive issues.

“Our bowling team wanted to raise money to help him and so many others fight this terrible disease,” Box said. “Multiple teams bowled against each other for fun, but with one common goal to fight cystic fibrosis.”

The team name, “Dr. Charlie Hufford’s Rollers,” was inspired by the late Charlie Hufford, the School of Pharmacy’s former associate dean for research and graduate programs. Hufford was a talented bowler who bowled more than 30 perfect games. 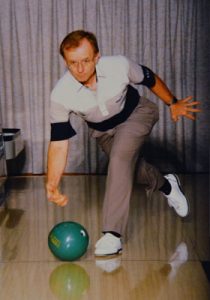 The late Charlie Hufford inspired the team’s name. The former associate dean for research and graduate programs was an avid bowler.

“I am so proud of our student pharmacists for supporting such a worthy cause,” said David D. Allen, dean of the School of Pharmacy. “Naming the bowling team after Charlie is a wonderful way to honor his impact on the school and his love of bowling.”

“We knew exactly what to name our team after Dean Allen told us about Dr. Hufford,” Box said. “By naming our bowling team ‘Dr. Charlie Hufford’s Rollers’ we were able to support cystic fibrosis research while honoring a man who was dearly loved by the School of Pharmacy.”

Donations for the fundraiser can still be made at olemisspharmacybowling.passioncff.org. The students also held a raffle with prizes donated from different businesses to fundraise prior to the event.

“The community of Oxford was so giving and kind,” Box said. “Without our local businesses, the raffle wouldn’t have been possible. I hope those who participated in the raffle and donated felt that they were part of our fight to end cystic fibrosis.”