OXFORD, Miss. – Erin Holmes, associate professor of pharmacy administration at the University of Mississippi School of Pharmacy, will be inducted as a Fellow of the American Pharmacists Association at the organization’s annual meeting Mar. 16-19 in Nashville, Tennessee.

“When I think of those who are current APhA Fellows and those who are being inducted in my cohort, I am absolutely humbled,” Holmes said. “This is an incredible honor, and I am grateful to those who nominated and supported me.” 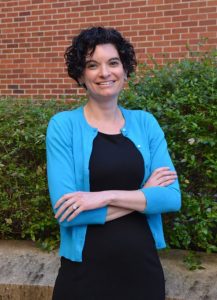 APhA is the largest association of pharmacists in the country and has a mission of “empower[ing] its members to improve medication use and advance patient care.” Fellows of APhA must display a history of exemplary service and achievement in the pharmacy profession for at least 10 years.

Holmes first attended an annual meeting of APhA as a student pharmacist in 2001. She later found mentors and served as an officer within the organization.

“I hope that being a Fellow will provide an outlet for me to mentor pharmacy and graduate students to help them grow in their profession,” Holmes said. “Through APhA, I have learned the value of networking and collaborating with others, and I want to pass those values on to students as well. I am indebted to the mentors who helped shaped my career.”

John Bentley, chair of the pharmacy administration department and one of Holmes’ nominators for the award, called her record of professional service and caliber of research and teaching “simply outstanding.”

“Dr. Holmes provides countless hours of her time helping others, including assisting and advising student organizations and mentoring pharmacy students and graduate students,” Bentley said. “Her dedication to students and their welfare is indeed admirable.”

Another of Holmes’ nominations for the award, written by pharmacy administration professor Alicia Bouldin, spoke to Holmes’ “can-do” attitude that encourages those around her.

“Whatever is asked of her, she freely and cheerfully puts her back, heart and mind into accomplishing in good time and in excellent order,” Bouldin said.

“This is a tremendous and very well-deserved honor for Erin,” said David D. Allen, dean of the School of Pharmacy. “Her accomplishments in the school and the profession demonstrate a deep dedication to the well-being of students and patients.”