Sandy and John Bentley Hit Love Out of the Park

OXFORD, Miss. – When Sandy and John Bentley began dating, they knocked love right out of the park. Almost 30 years later, the University of Mississippi School of Pharmacy faculty members continue to show their relationship is a grand slam.

Sandy and John met as undergraduate student workers in Drake University’s dining services. The pair didn’t really know each other until John, now UM School of Pharmacy’s chair and professor of pharmacy administration, spilled a five-gallon bag of chocolate milk as he tried to refill the container. It was a good thing he didn’t cry over spilled milk. 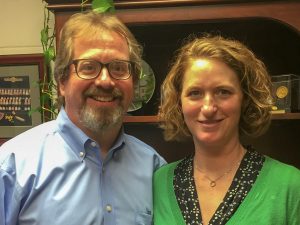 “I know a lot of people who would have had a fit, got upset, said bad words or stormed home for the day,” said Sandy, the operational director of UM Pharmacy Health Services. “Not John. He just calmly cleaned it up and kept working. I was so impressed with how he behaved after that, it caught my attention.”

The pair dated throughout pharmacy school and stayed together when John left Iowa for Ole Miss to pursue a graduate degree. He returned that winter for the holiday break with an engagement ring, planning to propose outside of Drake’s Old Main building. When the midwestern weather had snow and sleet in store upon John’s return, Sandy wanted to put his walking plans to Old Main on hold for a day, but not John.

“That was my whole thing, to walk around campus and propose on the steps of the building that’s the equivalent of the Ole Miss Lyceum,” John said. “I had been planning this and had the ring, so I couldn’t sit and wait another day. My impatience wouldn’t let me.”

Sandy said yes, they tied the knot that next summer and the two are now approaching 24 years of marriage. They find ways to work together, and recently collaborated on a project related to cigarette smoking cessation on campus with other pharmacy faculty and students.

Home life for the Bentleys is less pharmacy and more baseball, especially Ole Miss baseball. Their shared passion for the sport has them at Swayze Field for a majority of the Rebels’ home games and cheering on former players at the professional level.

The Bentleys travel to Omaha every year, even if the Rebels aren’t in the College World Series. When Ole Miss was in the CWS in 2014, Sandy even caught a ride home with the family of former student pharmacist Rachel Roberts when John had to leave early for a conference.

One Christmas, John bought Sandy a headset and a book on how to score baseball. She now keeps score at every game, which evolved from bringing her own printouts to now using an app on her iPad. Before the days of Twitter, Sandy even had parents of the student-athletes checking in with her to keep up with each play.

“Some of my proudest moments are when people around us are talking about something that just happened, and Sandy will turn around and quietly give them a little lesson on why it’s okay we walked this person or bunted in this situation,” John said. “She will kind of school them.”

The pair continue to learn from each other. John said that Sandy has showed him what it means to be a good pharmacist, and Sandy appreciates John’s passion for his subject matter, even naming their dogs after famous statisticians.

“His students will come into the pharmacy, and it dawns on them that I’m his wife,” Sandy said. “They’ll go on about how excited he is about statistics – not necessarily about how much they like it, but they see how much he enjoys and likes it. That’s pretty cool because that means he’s reaching them.”