OXFORD, Miss. – Purnendu Sharma, a fourth-year Ph.D. student in the University of Mississippi School of Pharmacy’s Department of Pharmaceutics and Drug Delivery, received an Alzheimer’s Drug Discovery Foundation Young Investigator Scholarship for his research on the natural product, Resiniferatoxin, or RTX.

Sharma’s project, titled “Effect of Resiniferatoxin, a TrpV1 Receptor Agonist on Neuronal Cells and evaluating it In vitro Neurotrophic Activity for Neurodegenerative Disorders,” showed the potential of RTX to help in the treatment of diseases like Alzheimer’s. 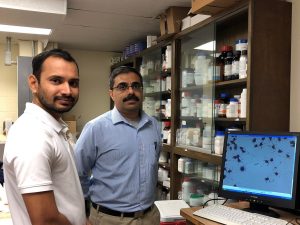 ADDF is one of the most prominent non-profit organizations in the world that provides funding to scientists conducting innovative Alzheimer’s disease drug research. The scholarship allowed Sharma, originally from Hyderabad, India, to attend ADDF’s 12th annual Drug Discovery for Neurodegeneration Conference in Washington, D.C., in February and present his research poster.

“This award is a great recognition,” Sharma said. “Being able to present to and interact with experts on this subject and receive feedback will have a great impact on this research and my career.”

Sharma works under the supervision of S. Narasimha Murthy, professor of pharmaceutics in the School of Pharmacy. He also had collaborative support from Babu L. Tekwani, principal scientist in the National Center for Natural Products Research, as RTX is a chemical found in a cactus-like plant in Morocco and Nigeria.

“Purnendu is a highly-focused and hard-working student,” Murthy said. “He was very deserving of this award for his novel findings on neurotrophic activity of nanoformulations of Resiniferatoxin. I am confident that Purnendu will have a successful career as a pharmaceutical scientist.”

Murthy added that Sharma’s work on other projects, including evaluating the microstructure of topical creams, has been recognized by the FDA and American Association of Pharmaceutical Scientists.