OXFORD, Miss. – Seena and Stuart Haines didn’t have any trouble building up their frequent flyer miles during their courtship. Long before each joined the University of Mississippi School of Pharmacy faculty in Jackson, the two were traveling between Maryland and Florida to see each other.

Although Seena and Stuart don’t have to go too far to see each other anymore, their love continues to take flight 13 years later. 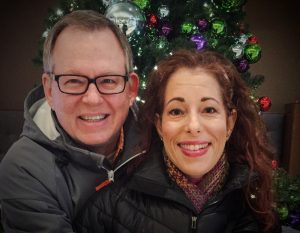 The Haines’ love story began at a pharmacy conference, but exactly which one is considered a toss-up. Stuart, the School of Pharmacy’s director of the Division of Pharmacy Professional Development, recalls being introduced to Seena at an American Society of Health-System Pharmacists Midyear Clinical Meeting and Seena, chair and professor of the Department of Pharmacy Practice, remembers meeting Stuart at an American Pharmacists Association meeting. Either way, it was at a small, invitational pharmacy meeting in Chicago where the pair actually got a chance to know each other.

After a long-distance relationship for over a year – Stuart was on faculty at the University of Maryland while Seena was at Palm Beach Atlantic University – Stuart popped the question. The proposal was supposed to be another type of flight, this time in a hot-air balloon over a vineyard in Calistoga, California. However, things didn’t go as planned.

When Seena picked up that they would be riding in a balloon, Stuart quickly learned of one of her fears – balloons. The plan was then diverted, and Stuart asked for Seena’s hand safely from the ground with the balloons overhead.

Now both at the School of Pharmacy’s UMMC campus, the Haines call working together “an adventure every day.” Occasionally they will commute or eat lunch together, and they have had opportunities to give national presentations and collaborate on scholarly work together. Once they get home, they try to keep work at work.

“We don’t talk about work at home very often,” Seena said. “Occasionally, it’s nice to get advice from someone who understands pharmacy and medical-related issues. When someone has a significant accomplishment, it’s nice having a partner who appreciates the significance and meaning.”

In their free time, the Haines love to enjoy delicious food and travel. They have been to almost every continent, and Africa is next on their list. Enjoying time together and apart is one thing they feel will help other pharmacy couples.

“Every married couple finds their own rhythm,” Stuart said. “There should be things you like doing together as a couple, but there are things that you should do as individuals. Finding hobbies or activities you like to do independently of your partner is equally as important.”

As their story continues to soar, a new chapter for the Haines is hitting the road – teaching their son, Ian, to drive.