OXFORD, Miss. – It was easy for Laurie and Josh Fleming to connect – they spoke the same language. They both specialized in ambulatory care and diabetes management as University of Mississippi School of Pharmacy faculty members on the Jackson campus, and the two easily formed a bond over work talk.

Then their love story began to take shape. 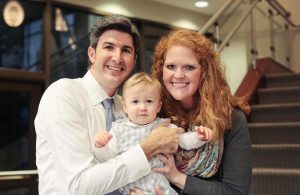 Josh and Laurie Fleming with their son, Garrett.

Although they are both Mississippi natives and Ole Miss graduates, the two never directly crossed paths until they began working together. Laurie, a clinical associate professor of pharmacy practice, completed her Pharm.D. and pharmacy residency in the state before joining the school’s faculty in 2010. Josh, a clinical assistant professor of pharmacy practice, had stops at the University of Tennessee, Campbell University and Johns Hopkins University. He met Laurie when he moved to Jackson to work at the School of Pharmacy in July of 2012.

“It has actually been such a blessing for us,” Laurie said of working in the same field as her husband. “There is always someone there with whom to bounce ideas. We both have a passion for working with students and residents, and it’s fun to celebrate their successes together.”

The two began dating after getting to know each other better through friends from church. Laurie saw many positive qualities in Josh that continue to inspire her – he sees the best in others, gives the benefit of the doubt and is never judgmental.

Josh was immediately attracted to Laurie’s kind personality, saying she is a good partner for him because she helps him better understand people from an emotional standpoint.

After dating for about eight months, Josh set out to propose with some help from their labradoodle, Wrigley. 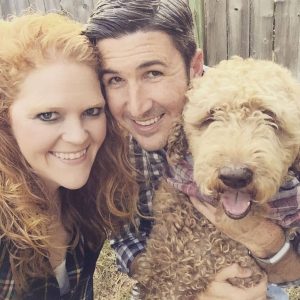 Laurie and Josh Fleming with their labradoodle, Wrigley.

“I knew that Laurie was expecting a proposal soon, so I wanted to propose when she least expected it,” Josh said. “I knew she would expect something if I planned a fancy dinner or trip, so on the morning of October 5, 2013, Laurie was coming to pick me up at my house to meet her family at a fall festival nearby. Wrigley and I were sitting on the front porch when she arrived. She walked up, and I pulled out the ring. Laurie was shocked and surprised, to say the least.”

After three years of marriage, the couple enjoys spending time outside, traveling to new places, eating well and, of course, watching their 17-month-old son, Garrett, grow up. They don’t let work get in the way of those precious moments.

“We like to debrief at the end of the day about where we have been and what we have done,” Laurie said. “It allows us to let the day go and move on to enjoy our time as a family.”

Laurie and Josh aren’t the first married couple in pharmacy, and they likely won’t be the last. They both agree that to make it work, couples have to make an effort to get away from the world of pharmacy. Laurie said that trips and friends outside of the profession have expanded their horizons. Josh agreed, but knows that working together can be an advantage.

“When you live and work together it is sometimes hard to get away from being a pharmacist,” Josh said. “A huge positive for us is that we typically get to attend a lot of the same conferences. This gives us opportunities to travel together often, and we have a partner to explore different cities.”