OXFORD, Miss. – University of Mississippi School of Pharmacy pharmaceutics professor S. Narasimha Murthy was elected as a Fellow of American Association of Pharmaceutical Scientists last weekend, one of the highest honors given to its members. 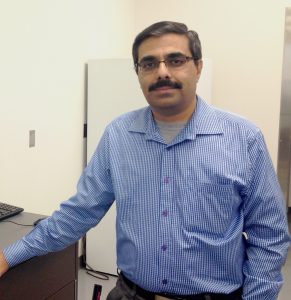 UM professor S. Narasimha Murthy was named an AAPS Fellow at the 2017 conference.

At its annual conference in San Diego on November 12, AAPS honored eight recipients, including Murthy, who have demonstrated a sustained level of professional excellence in fields related to its mission. Murthy conducts research to develop noninvasive technologies for the treatment of chronic disorders. He also founded a non-profit research organization in his home country of India to foster research that addresses unmet medical needs.

“I was humbled and honored by the recognition because it is one of the highest organizational recognitions,” Murthy said. “AAPS has had a huge influence on many facets of my career. It helped me connect with collaborators and pharmaceutical companies. AAPS programs have helped me to keep abreast of the latest developments in the field of drug delivery.”

Murthy has served as member of AAPS since 2005. He is actively involved in AAPS’s dermatopharmaceutics focus group, including having previously served as the group’s chair, while organizing webinars, symposiums and workshop for AAPS meetings. He is also a member of the editorial advisory boards of several scientific journals.

Murthy routinely assists graduate students with travel vouchers to attend AAPS meetings and present their work. The school presented 93 posters at this year’s conference, and one of Murthy’s graduate students, Purnendu Sharma, earned AAPS’s 2017 Graduate Student Award for a poster he presented.

“I am so pleased to see both Dr. Murthy and Purnendu earn these recognitions,” said David D. Allen, dean of the School of Pharmacy. “Dr. Murthy’s work at the school and his commitment to get our students involved in AAPS is invaluable, and both honors point to the strength of our pharmaceutics and drug delivery department.”