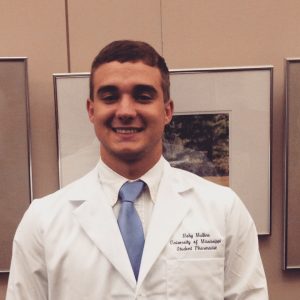 OXFORD, Miss. – Hoby Mullins, a first-year student in the University of Mississippi School of Pharmacy, received a $1,000 grant from the 2017 EPIC Pharmacies student grant program.

“I was very excited when I found out that I would receive the award,” Mullins said. “It is such a blessing to be able to receive money to help pay my tuition.”

Mullins’ accolade marks the fourth consecutive year a student from the UM School of Pharmacy has received the grant. 2017 graduate Jasmine Turner was named an honoree for 2015 and 2016.

Mullins, who calls Roxie, Mississippi, his hometown, is set to pursue his doctorate in pharmacy and hopes to form lifelong friendships with his colleagues. The award also puts him closer to his goal of operating his own pharmacy.