OXFORD, Miss. – Jimmie Valentine, a 1968 University of Mississippi graduate with a doctoral degree in medicinal chemistry, was honored with the School of Pharmacy Department of BioMolecular Sciences’ 2017 Joseph Sam Distinguished Alumnus Award.

Valentine holds degrees in both biology and chemistry from Centenary College of Louisiana and received his M.S. and Ph.D. degrees in medicinal chemistry from the UM School of Pharmacy. Retiring from the University of Arkansas in 2008 after 19 years as a professor of pediatrics, pharmacology and myeloma research, Valentine is now a consultant in medical pharmacology and toxicology. 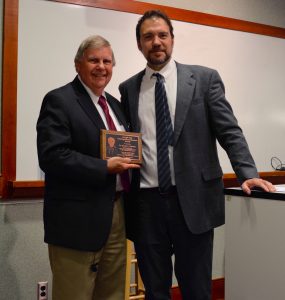 “Over the course of my career, I have been honored with several professional awards, but receiving the Joseph Sam Distinguished Alumnus Award was, for me, the ultimate honor,” Valentine said. “Having Dr. Sam as my graduate advisor gives this award special meaning due to my relationship with him during my graduate days at Ole Miss and for all the subsequent years that we were in touch. I recall many one-on-one conversations with him and his sage advice to me that helped me when I had my own graduate students, and later when I became a departmental chair.”

Prior to Valentine’s tenure at Arkansas, he was a faculty member at the University of Missouri-Kansas City from 1973-1978 and Oral Roberts University from 1978-1990 where he served as professor and chairman of pharmacology for six years.

At all the academic institutions where Valentine served as a faculty member, he also directed certified toxicology laboratories while overseeing active research programs on drugs of abuse, performing and developing analytical techniques for determining drugs of abuse and correlating levels found in humans with behavioral effects.

John Rimoldi, professor of medicinal chemistry and environmental toxicology at the School of Pharmacy, served on the award’s selection committee and knew Valentine was a perfect fit for the 2017 accolade.

“This award honors extraordinary alumni like Dr. Valentine, who have embodied our Division of Medicinal Chemistry’s tradition of excellence by their scientific accomplishments, professional achievements, inspirational leadership and service to the discipline,” Rimoldi said.

Valentine delivered the Joseph Sam Distinguished Alumnus Lecture titled “Bringing Science into the Courtroom” on Thursday, Sep. 21 at the School of Pharmacy. Valentine is board certified in applied clinical pharmacology and as a forensic examiner. He has been certified as an expert witness in numerous civil and criminal trials and administrative hearings concerning drug findings.

“In 1990, I had the privilege of being asked to present a seminar at Ole Miss at which Dr. Sam introduced me,” Valentine said. “I dedicated that lecture to him and Dr. Marvin Davis, who had been my teachers and advisors while I was a graduate student at Ole Miss. As I present the award lecture for this honor being bestowed upon me, I will again be honoring the memory of Dr. Sam and what he meant to me and the other students privileged to study under his tutelage.” 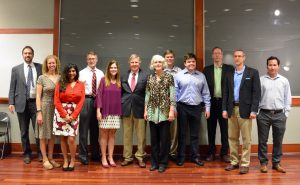 Valentine and his wife, Carrie, provided the UM School of Pharmacy an unrestricted gift of $25,000 back in 2014, which went toward renovations of the school’s skills laboratory. Carrie has also had an accomplished career, receiving degrees from the University of Oregon and the Massachusetts Institute of Technology. After her time as a faculty member at numerous schools, she accepted a position in 1992 as a research microbiologist for the Food and Drug Administration at the National Center for Toxicological Research until her retirement in 2008.

The couple works together on consultations and scientific writing and both are certified pilots.

“In addition to his Joe Sam Award address, I personally was very excited that both Drs. Valentine visited because they did a ‘tag-team’ presentation for my Introduction to Toxicology class on the current state of forensic sciences in the United States,” said Kristie Willett, chair of the Department of BioMolecular Sciences. “The 60 students in my course include both pharmacy and forensic chemistry majors who could benefit immensely from hearing first-hand accounts from these two experienced scientists.”