MILLINGTON, Tenn. – For the few people in Millington, Tenn., who don’t know where Boatwright Pharmacy is, Leroy Boatwright can now give them directions using his own name.

A 1949 graduate of the Ole Miss School of Pharmacy, Leroy Boatwright, now 91, opened his pharmacy in 1957. Last month, the city honored his service by renaming the street where the pharmacy has stood for 60 years to “Leroy Boatwright Street.” 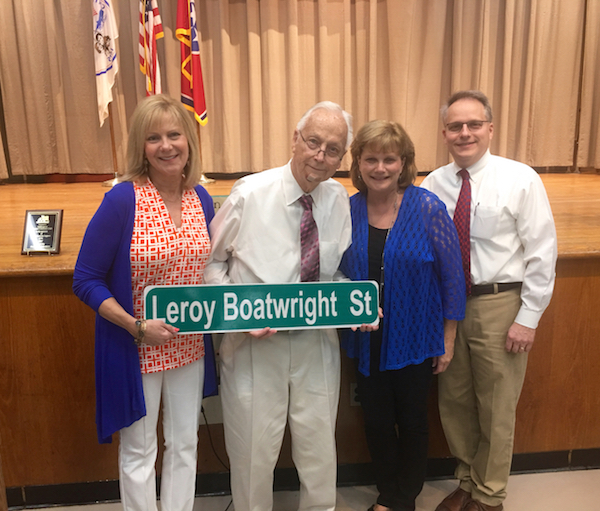 Friends of Boatwright’s from the Millington Senior Citizen Group secretly organized the campaign to rename the street. Meanwhile, his son Steven Boatwright, a 1988 Ole Miss Pharmacy graduate and his father’s successor at Boatwright Pharmacy, made sure his family would be in town for the renaming ceremony in mid-August.As part of the ceremony, the mayor of Millington, Terry Jones, and members of the Board of Aldermen, spoke about Boatwright’s impact on the community. They presented Boatwright with gifts, a key to the city and a proclamation declaring the street name changed.

“It was very special,” said Laura Smith, Boatwright’s daughter and 1980 Ole Miss Pharmacy grad. “My dad was overwhelmed and humbled by it all. He’s served several generations in his store, and the people of the community mean so much to him.” 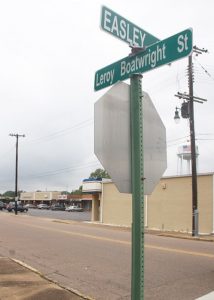 The new sign was installed down the road from Boatwright Pharmacy. Photo courtesy of the Millington Star.

All of Boatwright’s three children are pharmacists and graduates of the Ole Miss School of Pharmacy, including Emily Provence, class of 1983. Provence and her husband Bradley are both involved in Boatwright Pharmacy. Smith and her husband Brent, a 1975 graduate of the pharmacy school, co-own Chaney’s Pharmacy in Oxford, Miss.

“We grew up in his store, and I always knew that it was for me,” Laura Smith said. “He was the greatest influence on all his children in choosing this profession.”

Even though Boatwright is retired, he keeps his pharmacist’s license up-to-date and still comes into the store from time to time and speak with customers and help patients.

Leroy Boatwright said he was very surprised by the honor and grateful to his family, friends and the city.

“I really appreciate everything everyone did,” Boatwright said. “It’s been a good trip.”