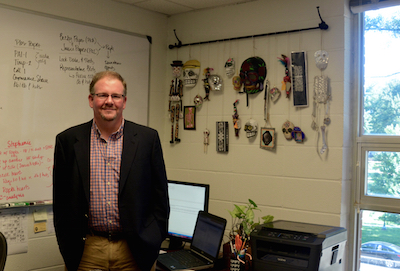 Stewart in his office.

OXFORD, Miss. – Jamie Stewart, associate professor of pharmacology in the Department of BioMolecular Sciences, joined the faculty of the School of Pharmacy this summer after teaching at Mississippi State University.

Stewart earned a B.S. in microbiology and a Ph.D. in biomedical sciences from Auburn University before completing post-doctoral internships in South Carolina and at Louisiana State University Health Sciences Center in New Orleans. After leaving New Orleans, Stewart moved to Ohio for a short time.

“I transferred up to Ohio State, got tired of the snow, and came back to Mississippi,” Stewart said.

An Alabama native, Stewart said he never thought he would live in Mississippi, but is happy that he ended up at Ole Miss.

His research focuses on diabetes and heart disease, including what factors contribute to the transition from type 2 diabetes to diabetic heart disease. 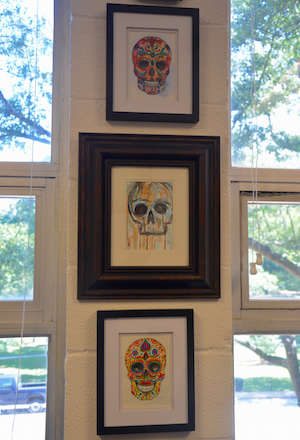 Jamie Stewart’s paintings in his office.

“About 60 to 70 percent of all diabetics die from some kind of cardiac anomaly,” Stewart said. “With that rate, it seems to be more than just a coincidence.”

Stewart also conducts research in the Mississippi Delta. Due to the Delta’s large agricultural industry, pesticides often wash off the land and into the surrounding waterways. Stewart says that once these chemicals make their way back up the food chain, they may contribute to higher instances of metabolic diseases in the region.

Outside of his research, Stewart enjoys spending time with his family and painting.