School of Pharmacy Professor Retires After 32 Years of Service

OXFORD, Miss. – Rachel Robinson, clinical assistant professor of pharmacy practice, retired on June 30, 2017, after 32 years of teaching and mentoring at the University of Mississippi School of Pharmacy. 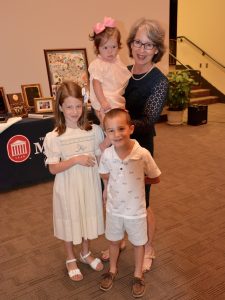 Rachel Robinson, retiring assistant clinical professor of pharmacy practice, and her grandchildren at her retirement ceremony in June 2017.

Robinson received both of her degrees from the UM pharmacy school, earning a B.S. in Pharmacy in 1978 and her Pharm.D. in 1997.

“Rachel leaves behind a legacy of student-centered teaching and service to the department, the school and the Oxford community,” said Seena Haines, chair of the pharmacy practice department. “Her influence is a part of the fabric of our department.”

In addition to teaching, Robinson was the director of Drug Information Services for the pharmacy school and a faculty advisor for Kappa Epsilon, a professional fraternity for women in pharmacy. In 2003, she received Kappa Epsilon’s Outstanding Advisor Award. 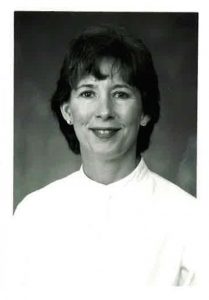 Robinson won many other awards throughout her career, including the 1990 Syntex Preceptor of the Year Award for her work as a preceptor for the pharmacy school. Before she was on faculty, she was named the Staff Member of the Year in 1995, and then in 2002, won the Pharmaceutical Sciences Teacher of the Year Award, voted on by the fourth-year pharmacy students. In 2008, she received the School of Pharmacy’s Faculty Service Award and won the Friend of Student Award in 2011, 2012, 2016 and 2017.

“Rachel is an incredibly gifted professor and a natural at guiding and encouraging students along their academic journey,” said David D. Allen, dean of the School of Pharmacy. “Her service to the school over 32 years is immeasurable, and she will surely be missed.”

Robinson’s last class of students wanted to send her into retirement with a gift, so third-year pharmacy student Emily Lewis sewed a quilt for her, referencing Robinson’s love of sewing.

“It was a total surprise,” Robinson said. “I was completely overwhelmed with emotion, and it was hard to hold back the tears. I was just so honored and humbled to receive this incredible gift of love.”

Lewis said her class feels lucky to have had Robinson as their professor, citing her humor and helpfulness in making her classes particularly enjoyable.

“She truly is a friend of the students,” Lewis said. “She always goes above and beyond for all of us.”

Robinson mentored students outside of the classroom as well. According to Lewis, students frequented Robinson’s office, “to talk about school, future plans or even just to chat about life. 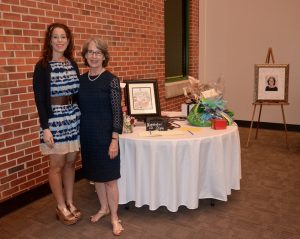 Seena Haines (left), chair of the Department of Pharmacy Practice, and Robinson at her retirement ceremony in June 2017.

“She always made time for us, even if that was just stopping to talk in the hallway,” Lewis said. “I cannot imagine the School of Pharmacy without her.”

Robinson said she will miss her co-workers, the “family-like” atmosphere of the school and getting to know the students.

“Watching students develop over time was the most rewarding part of my career,” Robinson said. “Being a pre-pharmacy adviser, I watched so many go from their freshman year all the way to graduation, and the transformation is amazing. It’s like having hundreds of your own children grow to maturity.”

Upon retiring, Robinson plans to pursue her hobbies of sewing, refurbishing antique furniture and camping in her restored 1968 Airstream trailer. She also plans to continue serving uninsured residents of Lafayette County as a board member and volunteer pharmacist for the Oxford Medical Ministries.