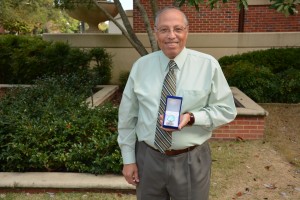 A professor at the University of Mississippi School of Pharmacy was awarded a Silver Medal from Kazakh National Medical University in Almaty, Kazakhstan.

Samir Ross, professor of pharmacognosy and research professor in the Research Institute of Pharmaceutical Sciences, was honored with the medal on Oct. 2. Ross received the medal for his long history of scientific and collaborative work with the university, which includes supervising graduate students and writing grant proposals with Kazakh researchers.

“I was very honored and pleased to receive this medal,” Ross said. “I’ve supervised seven Ph.D. students at their pharmacy school. Three of them, Yerkebulan Orazbekov, Aknur Turgumbayeva and Manas Omyrzakov, defended their dissertation this year and received degrees in natural products chemistry and technology.”

Kazakh National Medical University has been recognized as the No. 1 medical institute in Kazakhstan. In 2012, Ross received a Gold Medal from the institution followed by a Bronze Medal in 2014. The medals honor S.D. Asfendiyarov, the university’s first rector.

“Dr. Ross is very deserving of this recognition,” said Larry A. Walker, NCNPR director. “He has made a great impact on students from Kazakh National Medical University. This global outreach is important in regard to advancing our work at the National Center for Natural Products Research.”

Ross, who has worked in natural products research for some four decades, has produced more than 230 publications over the course of his career and owns 11 patents related to his research. His other awards include a Silver Medal from the University of Veterinary and Pharmaceutical Sciences Brno in the Czech Republic in 2013 and the UM School of Pharmacy’s Faculty Research Award in 2009.

Ross said he is appreciative of support from the school’s administrators.

“It is a great honor for me to represent the University of Mississippi School of Pharmacy and the National Center for Natural Products Research,” he said. “I want to express my gratitude and thanks to Dr. Walker and Dean (David D.) Allen for their continuous help and encouragement to me.”