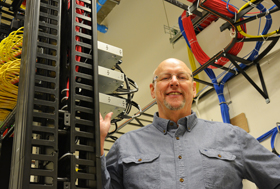 As the School of Pharmacy’s telecommunications analyst II, Randy Allen is the go-to person for information technology. Allen, who recently celebrated his 10-year anniversary with the school, is responsible for managing the wired and wireless networks, servers,  audiovisual equipment and so much more.

In the past decade, he has worked on the redesign of Centennial Auditorium in the Thad Cochran Research Center, developed teleconferencing capabilities between pharmacy’s Oxford and Jackson campuses, and helped numerous students and faculty members with various IT issues. He also prints more than 500 posters a year for faculty and students. Pharmacy Matters met with Allen and asked him to share some insights about his work.

Q: Why did you want to work in IT?
A: I didn’t know it at first, but I was born to work on computers. I became interested in them in the late ’80s and was amazed at all the things they can do. All of the advances in technology excite me, and I wanted to share them.

Q: What has been the best advice given to you since you started working here?
A: I consider something Dr. Marvin Wilson (associate dean emeritus for academic and student affairs) told me at his retirement party some good advice. I told him that it had been great working for him, and he corrected me, saying, “You didn’t work for me, you worked with me.” I take that as meaning working for someone is a job, but working with someone is a partnership. If you have a partnership, goals are much more obtainable.

Q: Have there been any projects or accomplishments that you consider to be most significant in your career? What was your favorite?
A: The most significant project was getting all the audio/video equipment working correctly in Centennial Auditorium. It took several years, two companies and a redesign before the goal was accomplished. It’s still not perfect, but it is way ahead of anything else I have seen on campus. This was also my favorite project because I met several people that were more knowledgeable than I on audio/video systems and worked with them, soaking up little tidbits of information to help me in the future.

Q: What do you like to do in your spare time?
A: I am a dog lover. When I get home, I have a little playtime with my dogs. After that, being an avid video gamer, I will sit down at my computer and play whatever game I am currently interested in.