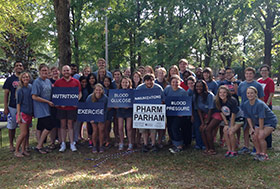 Some 40 students volunteered for Pharm at the Parham.

October is American Pharmacists Month, an opportunity for pharmacists across the nation to draw attention to their work and promote their profession. Students at the University of Mississippi School of Pharmacy participated in the celebration in various ways.

“Our students are incredible advocates for the profession of pharmacy year-round, but their efforts are even bigger during Pharmacists Month,” said David D. Allen, the school’s dean. “Their enthusiasm is remarkable and results in great community education and outreach.”

Two initiatives, Pharm at the Parham and Operation Immunization, were highly successful.

Pharm at the Parham is an annual, free community health fair at Parham Bridges Park in Jackson. The Oct. 11 event was organized entirely by UM pharmacy students.

“The main goal of PATP is to screen patients in the community for chronic diseases such as hypertension and diabetes mellitus,” said Anna Claire Freeman, fourth-year professional (PY4) student and public relations chair for the event. “Additionally, we aimed to promote healthy lifestyles, encourage vaccinations, and raise awareness in the community for the profession of pharmacy and the advice and services we can offer to our patients.”

With more than 50 community members in attendance, the event featured informational booths that offered services such as blood pressure measurement, exercise advice and nutrition education.

“PATP was definitely a success,” said Freeman, a Ridgeland native. “We want to thank the students that participated and the community members that attended. A special thanks goes out to Kayla 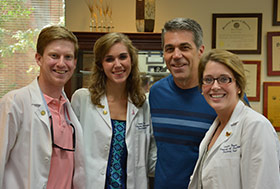 Creel and Carlos Black (PY4 students) who organized the event as our community service co-chairs.”

Sponsored by the American Pharmacists Association, Operation Immunization is a national immunization education campaign. Local chapter members of the APhA-Academy of Student Pharmacists began a local flu shot drive in September in conjunction with the initiative.

“We provided immunizations to the Ole Miss community at 12 different locations during September and October,” said Kelsey Stephens, PY2 student and president of APhA-ASP. “Through collaboration with the athletics department, we were even able to provide our student-athletes with flu shots as well.”
See caption

When ESPN’s “College GameDay” came to campus for the Ole Miss-Alabama game Oct. 4, students jumped at the opportunity for publicity on a national stage. They coordinated a “social media blitz,” where students shared posts on Twitter, Facebook and Instagram that encouraged the show’s hosts to get their flu shot.

Their efforts paid off, and students were able to provide immunizations for “GameDay” host Chris Fowler and some of the show’s staff members.

“Through these interactions, we were able to advocate for our profession to a very large audience,” said Stephens, a Greenwood native. “We were fortunate that ‘GameDay’ staff members were so willing to participate in our campaign. It was both fun and effective.”