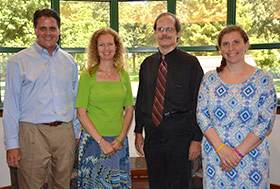 The University of Mississippi School of Pharmacy recognized four faculty members at its annual faculty retreat this summer.

“Each year, we honor faculty members that go above and beyond the call of duty, whether that be in the areas of research excellence, service or teaching achievement,” said David D. Allen, the school’s dean. “I’m so proud of our awardees – they are truly making a difference with their outstanding work.”

Tracy A. Brooks, assistant professor of pharmacology, was presented with the New Investigator Award. Since joining the school in 2011, Brooks has published four research papers and has another three manuscripts under consideration.

In addition, Brooks has been awarded two highly competitive grants. She has also delivered five regional, national and international presentations on her work.

Her nomination letter stated that as an assistant professor, her activities in the area of research are “outstanding while she continues to remain committed to pharmacy education.” She was given the school’s Teacher of the Year Award for second-year professional students in 2013.

Stephen J. Cutler, chair of the Department of BioMolecular Sciences, received the Cumberland Pharmaceuticals Inc. Researcher of the Year Award. Cutler was primarily recognized for his work with the National Institutes of Health-funded Centers of Biomedical Research Excellence, or COBRE, program.

The COBRE program has funded the Center of Research Excellence in Natural Products Neuroscience at UM. CORE-NPN has been awarded nearly $4 million over the past two years. Cutler serves as overall program director.

The letter nominating Cutler said that he is a “natural and inspired leader in research.” He has published 22 research articles over the past three years, one of which was named the 2014 Research Article of the Year by the American Chemical Society’s Journal of Agricultural and Food Chemistry.

Theilman, associate professor of pharmacy practice and coordinator of instructional technology, implemented a number of unique teaching methods during the 2013-14 school year. Many of these methods are centered on computer software that he created.

In a pharmacokinetics course, Theilman shifted the emphasis of face-to-face class time from didactic learning to active problem solving. This included prerecording lectures and offering team-based quizzes in class with online “scratch-off” cards.

Willett has served as an elected officer in the Society of Toxicology’s Molecular and System Biology Specialty Section for the past 10 years. She also serves as an advisory board member for the Mississippi Water Resources Research Institute and as chair of the organizing committee for the 2014 South Central Chapter of the Society of Toxicology meeting.

Willett is a standing committee member for the National Institute of Environmental Health Sciences. She has published more than 60 manuscripts and book chapters. She has also delivered numerous national and international presentations on her research.