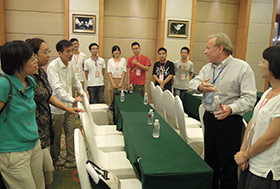 Dale G. Nagle and Yu-Dong Zhou, both professors in the Department of BioMolecular Sciences, were selected as delegates for the summit, which consisted of two symposia held in August. Nagle represented UM by traveling to China for the events.

“This is a great honor because the summit was organized by some of the top marine natural products researchers in the U.S. and China,” Nagle said. “Less than 20 U.S. delegates were selected to participate in this groundbreaking event.”

Held in Yantai and Ningbo, China, the symposia served to create meaningful connections among those researching marine natural products and biotechnology.

More than 90 percent of cancer mortality is caused by “systematic metastases,” Nagle said.

“In collaboration with Dr. Zhou, our program has been evaluating extracts and compounds from marine organisms and certain plants for their potential to suppress metastatic breast tumor cells that are specifically programmed to adapt and grow in either the lungs, brain or bones,” he said. “Initial data suggest that marine invertebrates and plants produce natural products that exhibit potential target organ-selective anti-metastatic activity.”

“Discussions from the symposia have led to new collaborations that will open up, for the first time, the opportunity to examine the chemical constituents of Chinese marine organisms for their anti-metastatic potential,” Nagle said. “Efforts are also underway to evaluate important Asian marine-derived food products, like edible seaweeds, for the ability to complement traditional cancer therapies by suppressing the spread of tumors to specific organs.”

Nagle said a major outcome of the second satellite symposium was the assembly of a U.S.-China consortium to facilitate development and commercialization of joint marine biotechnology products.

“Based on efforts initiated in Ningbo, about a half-dozen other U.S. and Chinese symposium participants and I have been working to create an invention development incubator that will accelerate the advance of new marine products to the market,” he said. “This group is working with Ningbo University and Chinese pharmaceutical industry representatives to fund the program that would provide support for product development and testing, and sponsor scientist exchange and training programs.”