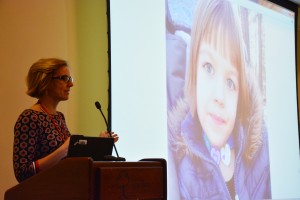 Paige Figi, whose daughter Charlotte suffered from a severe form of epilepsy, speaks to conference attendees about cannabidiol treatments.

The University of Mississippi School of Pharmacy’s National Center for Natural Products Research hosted a symposium Feb. 5-6 focused on the status and prospects for a promising, orally administered therapeutic derived from cannabis. Invited representatives from federal agencies, universities and pharmaceutical companies were in attendance.

The conference’s discussions surrounded development of a standardized cannabidiol oil that could serve as a seizure treatment for children. The oil contains a very low amount of tetrahydrocannabinol, or THC, the principal psychoactive constituent of the cannabis plant, and a high amount of cannabidiol, or CBD, a nonpsychoactive constituent of the cannabis plant that may have anti-seizure activity. More than 20 states have passed legislation related to studying CBD in the form of a purified drug substance or as an oil extracted from a special variety of cannabis.

Sharing expertise and examining how to expedite the treatment’s development were broad goals of the event. UM has become the go-to institution for questions related to federal regulatory issues and the chemistry of cannabis, said Don Stanford, assistant director of the university’s Research Institute of Pharmaceutical Sciences.

“We made a lot of progress, and all who attended gained a greater understanding of what needs to be done in terms of science, regulation and funding,” Stanford said. “I feel this project is shaping up to be a success.”

After securing federal-agency approvals, NCNPR recently grew a variety of cannabis that has a higher concentration of CBD and a lower concentration of THC. Once additional government requirements are met, researchers at NCNPR will prepare a standardized CBD oil from the plant material for research use in patients under an Investigational New Drug application submitted to the Food and Drug Administration. Physicians at the University of Mississippi Medical Center would conduct clinical trials on patients who have not responded to marketed anticonvulsant products.

Mississippi’s bill is named for Harper Grace Durval, a 2-year-old girl who suffers from a rare form of epilepsy called Dravet Syndrome. Paige Figi, a Colorado mom whose daughter Charlotte also suffers from Dravet Syndrome, attended the conference. Charlotte Figi’s condition was drastically improved by a daily dose of the CBD oil, leading to a grass-roots effort to exempt CBD oil from controlled-substance laws in several states.

“Her life is a 180-degree turnaround from what she was,” Paige Figi said. “She was an end-of-life, do-not-resuscitate hospice patient – and that’s just one patient. … I get to see the efficacy on epilepsy, and it’s absolutely worthwhile to pursue this.”

Figi said that the conference was critical because of UM’s unique expertise in marijuana research.

“I think the world is watching what is going to happen here – not just the United States,” she said. “We would like to push things further, a little faster so that we can prove or disprove what this is going to be used for.”

Mahmoud ElSohly, NCNPR research professor and director of the university’s Marijuana Project, said that many institutions in states that have enacted laws facilitating CBD research were initially unsure of how to proceed.

“We believe the best path is to develop a chemically standardized CBD oil as a botanical drug in accordance with FDA requirements, prepare the oil under Good Manufacturing Practices, and develop formulations that can be used in clinical trials to determine the safety and efficacy for the patients who would be taking this,” ElSohly said. “This conference was a great exchange of information and ideas. We feel that everyone walked away more comfortable with the process they are going to take to make this happen.”

Figi said the number of scientists at the event encouraged her.

“I know all of you are comfortable talking about this subject because you are in the room,” she said while presenting to attendees. “Whatever side of the fence you are on, thank you for being here to talk about this.”