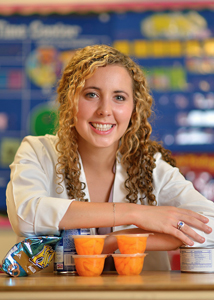 One could use the word “stunned” when describing how Mary-Haston Leary, a second-year professional pharmacy student from Oxford, felt upon learning that she had won the University of Mississippi’s highest service award.

“I was so shocked and humbled when I found out,” Leary said. “I am blessed to live in Oxford and to be a part of a university where there are so many people that care about others. This award deserves to be split 100-fold with all of those who dedicate their time and energy to improve our community.”

Leary was honored as the university’s first student recipient of the Algernon Sydney Sullivan Award at its Celebration of Service ceremony in April. The award honors individuals who exhibit nobility of character, exemplified by selfless service to others and the community.

The McLean Institute for Public Service and Community Engagement presented the award in partnership with the Office of Volunteer Services.

“The McLean Institute is honored to recognize those who practice exemplary service to others with the Algernon Sydney Sullivan Award,” said Albert Nylander, director of the institute. “This is the university’s highest honor for community service, and the award seeks to recognize those who serve others with no expectation of recognition. The fact that Mary-Haston was so surprised to receive this award confirms that she is a deserving recipient.”

Established in 1980, the award is presented to individuals in more than 60 colleges and universities nationwide. Its criteria emphasize “placing service to others and the community before oneself, while embodying the qualities of honesty, morality, ethics, integrity, responsibility, determination, courage and compassion.”

Service is ingrained in all aspects of Leary’s life. She is involved in service projects with her church and the pharmacy school, and during her personal time. One of the most notable is Lovepacks.

Co-founded by Leary’s mother in 2010, Lovepacks is a nonprofit that provides food to schoolchildren in need in the Oxford community.

“When my mom told me the story of how a child was sneaking half-empty milk containers in his backpack to take home, I knew I had to be involved,” Leary said. “I became secretary of their newly founded organization and would type minutes as they brainstormed ways to help. The decision to join the founding team of Lovepacks triggered my desire to give back to our community.”

Today, the organization has provided more than 10,000 packs of food to school-aged children in Oxford and Lafayette County. Leary often involves her peers at the university in the effort.

“Working as an officer with the National Society of Collegiate Scholars, we were able to win a grant for Lovepacks while involving members in regular projects and food donations,” she said. “Recently, I worked with pharmacy students Emily Draper and Gabe Hinojosa to have the American Society of Health-System Pharmacists and the Academy of Managed Care Pharmacy join forces to make mini first-aid kits to send home with the children.”

Leary also is an active member of St. John’s Catholic Campus Ministry, which has provided her with opportunities to volunteer with More Than a Meal, Graceland Care Center and the Mississippi State Veterans Home of Oxford.

Since reaching legal age, Leary has been donating blood regularly. This year she was recognized as an “Off the Field Hero” at one of the Ole Miss football games for being one of the campus’ top blood donors.

“My grandfather passed away from multiple myeloma, a blood cancer, and I realize how important it is for hospitals to have access to blood,” she said.

Service was even an important factor in Leary’s career choice. She knew that her life’s work had to make a difference in the lives of others.

“I realized the potential for positive impact through working in health care in Mississippi, where the prevalence of chronic diseases and high infant mortality rate leave much room for improvement,” she said.

As a pharmacy student, Leary has already enjoyed putting her profession to work by volunteering with classmates at the DeSoto Health and Wellness Clinic and assisting with the flu immunization drive on the Oxford campus. When she becomes a pharmacist, Leary hopes to go on medical mission trips and provide drug education in Mississippi.

Leary’s service already reaches far beyond Oxford. Last summer, she had a “life-changing” experience in Pokhara, Nepal, where she lived and worked as a volunteer pharmacy intern in May and June. During that time, she worked in an impoverished hospital and served critically ill patients.

“After experiencing and living in a Third World country, I truly appreciate everything we have in the U.S. and realize how fortunate we are,” she said. “This experience made service come to life; I could see firsthand the positive impact of giving back.”

“Mary-Haston is a scholar, a leader, a selfless servant, compassionate, and a person of high integrity and moral standards,” Bentley said. “The profession of pharmacy needs people like her who are willing to place the interests of their patients, the people we pharmacists serve, above their own. Indeed, it is the only way the profession will survive and flourish. As pharmacy professionals, we are fortunate to call Mary-Haston one of our own.”

“Mary-Haston’s service truly comes from the heart — she never seeks recognition for her efforts,” Allen said. “I have greatly enjoyed getting to know her and am proud that she is a part of the School of Pharmacy family.”

Leary, who will complete a competitive internship at Johns Hopkins University this summer, has learned a great deal about the impact of service over the years.

“During my time in Nepal, I realized that in serving others I am the one who benefits most,” she said. “I learned and gained more from the patients there, with their positive attitudes and extraordinary gratitude, than anything I could have provided to them in return. That is what service means to me. It is not a one-way street, where we simply donate our time and services. Rather, if we allow it to be so, it is a mutualistic process. Whether it be strangers on the other side of the world, members of our own community or our next-door neighbors, everyone stands to gain when we help one another.”