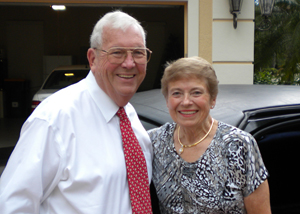 For more than a decade, the Terence E. Downer Scholarship has supported pharmacy students at the University of Mississippi.

The endowment honors Terence E. Downer, who died April 25 after a short battle with cancer, and will benefit the school in perpetuity.

Scholarships from the endowment are awarded annually to students pursuing careers in pharmaceutical marketing. A committee of faculty members from the School of Pharmacy’s Center for Pharmaceutical Marketing and Management and Department of Pharmacy Administration selects the recipients.

The scholarship fund, which has supported 10 students to date, was fully endowed in 2006.

Downer worked at Johnson & Johnson for 31 years. He retired in 1997 as the company’s vice president of licensing and acquisitions and as a member of the board of directors of its subsidiary, Janssen Pharmaceutica.

Downer established the scholarship endowment through the Health Care Marketing and Communications Council. Richard Sawyer, a member of the council and then its  executive director, helped Downer initiate the fund as a retirement gift with the help of his colleagues and Mickey C. Smith, then F.A.P. Barnard Distinguished Professor of Pharmacy Administration at Ole Miss.

“What better retirement gift than a scholarship in his name at the University of Mississippi’s School of Pharmacy?” Sawyer said. “We surprised Terry with the announcement at his retirement get-together, and the rest is history.”

According to his obituary, Downer’s final wish was for people to celebrate his life.

“He truly was an amazing man and good friend,” Sawyer said. “Further, he was recognized as a true gentleman by everyone with whom he came in contact – bar none.

“I visualize Terry’s scholarship as the roots and trunk of a tree and the 10 scholarship recipients to date as its branches,” he said. “Those branches make up an important part of Terry’s legacy, and new branches will continue to be added.”

“Terence Downer was an extraordinary friend of our school,” Allen said. “This scholarship is a testament to his dedication to our pharmacy students.”

To contribute to the Terence E. Downer Scholarship Endowment, mail a check with the fund noted in the memo line to the University of Mississippi Foundation, P.O. Box 249, University, MS 38677. Online gifts can be made at http://www.umfoundation.com/makeagift.