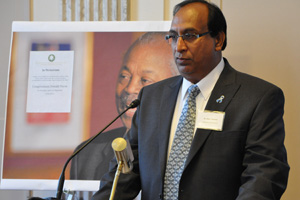 According to the World Health Organization, malaria kills an estimated 660,000 people worldwide, most of them children under five years old living in the tropics of sub-Saharan Africa. More than 200 million cases occur each year, most of which are never tested, registered or treated.

To energize the world’s commitment to fight malaria and continue investing in malaria prevention, treatment and control, the WHO instituted World Malaria Day in 2007. This year, it is set for April 25.

As part of the annual event, research and academic institutions are encouraged to “flag” their scientific advances to defeat malaria to experts and the general public, alike. University of Mississippi researchers are upholding that mission by hosting an April 24 program at the Yerby Conference Center at 1 p.m. The event is free and open to the public.

“This program will highlight the University of Mississippi’s efforts to discover new antimalarial drugs using a multidirectional discovery approach,” said Babu Tekwani, principal scientist and professor of pharmacology at the UM School of Pharmacy’s National Center for Natural Products Research.

“Although high incidences of malaria are mostly centered in tropical regions, the health, economic, social and political impacts of the disease are global,” he said. “Recent trends indicate rapid emergence of drug-resistant and more virulent strains of malaria parasites, which are further intensifying the problem.”

NCNPR’s director, Larry A. Walker, will deliver the program’s keynote address: “The Thorny Pathways for Discovery of Safe Antimalarial Drugs.”

“For more than two decades, Ole Miss scientists have made important contributions to the study of primaquine – ways to improve its activity and make it safer to use,” Walker said. “I will summarize some of our challenges, surprises and successes.”

Tekwani will continue to advocate for malaria research and awareness at an April 25 event on Capitol Hill, where the U.S. Senate Caucus on Malaria and Neglected Tropical Diseases is holding a panel discussion and exhibition focusing on the importance of U.S. partnerships in the fight against malaria.