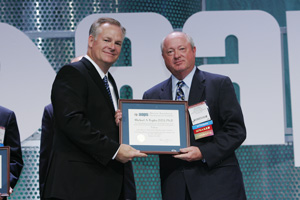 A University of Mississippi pharmacy professor has been elected a fellow of the American Association of Pharmaceutical Scientists for his pioneering work on hot-melt extrusion, a technology which is shaping advanced manufacturing in the pharmaceutical industry.

Michael A. Repka, professor and chair of pharmaceutics, was nominated for fellowship status by a retired pharmaceutical industry executive.

“His vision for using hot-melt extrusion helped shape the industry’s view of the technology” and “thrust it into the forefront to change the paradigm of pharmaceutical manufacturing,” said Michael J. Akers, Baxter BioPharma Solutions’ retired senior director of pharmaceutical research and development.

The UM School of Pharmacy professor’s advances in hot-melt extrusion technology appear in 15 peer-reviewed articles, of which he is primary author, “in almost as many different journals,” Akers said. “Today, almost without exception, any publication dealing with hot-melt extrusion will cite one or more of Dr. Repka’s publications.”

Repka is editing a book (Melt Extrusion: Equipment and Pharmaceutical Applications) on using the technology in drug formulation design and development for release at AAPS’s November 2013 annual meeting.

AAPS confers fellowship status upon those exhibiting “superior and distinguished” professional achievement and contributions to the pharmaceutical sciences and honors them at its annual meeting and exposition in Washington, D.C. A release announcing the organization’s 10 newest fellows said that formulating, stabilizing and developing new methods for delivering poorly soluble drugs also are important aspects of Repka’s research.

“Dr. Repka has made significant contributions in a variety of formulation and drug-delivery fields (e.g., nose-to-brain, transdermal, transcorneal, transmucosal and intranasal),” Akers said. “His work on drug delivery through the human nail resulted in the granting of a U.S. patent. He also holds three other U.S. patents and has several in submission.”

One is for a transnail patch to deliver antifungal drugs through the nail bed to treat fungal infections. The patch is processed using hot-melt extrusion.

“There are a lot of advantages to using hot-melt extrusion technology,” Repka said. “It’s a simple process in which drugs can be extruded into a film and die cut into desired sizes. It’s also more environmentally friendly and entails less equipment, so it’s more cost-efficient.”

“He has founded two pharmaceutical companies and is chief executive officer of one (Mikkur Inc.),” Hickey said. “And he continues to consult for the pharmaceutical industry and other groups, leveraging his expertise to contribute to their success.”

Repka is north-American editor for the Journal of Drug Delivery Science and Technology, associate editor of AAPS PharmSciTech journal, chair-elect of the organization’s 4,200-member Formulation Design and Development Section and serves on several editorial advisory boards.

“Mike is a recognized thought leader and lends his reputation and services to a range of societies and editorial boards,” Hickey said. “He demonstrates excellence in all of his endeavors and will serve as a model for future generations of pharmaceutical scientists.”

That excellence has been recognized many times during Repka’s career. In 2008, he received the New Investigator Award at the National IDeA (Institutional Development Awards) Symposium for his work on a transmucosal patch, which delivers THC (tetrahydrocannabinol, the main psychoactive ingredient in Cannabis) into the bloodstream, so patients don’t have to smoke marijuana or take a pill to obtain the drug’s medicinal benefits. The work was funded, in part, by a National Institutes of Health Center of Biomedical Research Excellence grant awarded by NIH’s National Institute of General Medical Sciences through its IDeA program.

Also in 2008, Repka received the Researcher of the Year Award from the American Association of Indian Pharmaceutical Scientists. In 2005, he won the J. Morita Investigator Award for Geriatric Oral Research and First Prize for Oral Presentation at the 83rd General Session and Exhibition of the International Association of Dental Research.

Since he became chair of UM’s Department of Pharmaceutics, it has increased its graduate student enrollment from 5 to 30 (95 percent of them are Ph.D. students), and its Ph.D. graduates have been hired for jobs in industry, academia and the U.S. Food and Drug Administration. The department also has garnered more than $4 million in external funding, which included a gift from an alumnus last year to create the Pii Center for Pharmaceutical Technology.

“It has already increased our exposure worldwide, which was one of my goals upon coming to Ole Miss,” Repka said.

“We are delighted Dr. Repka has been elected an AAPS fellow,” said David D. Allen, UM School of Pharmacy dean. “Mike’s work is pivotal to our mission of improving health through advances in the pharmaceutical sciences and sharing those advances with industry and our students. We look forward to his continued leadership and contributions to our teaching and research programs.”