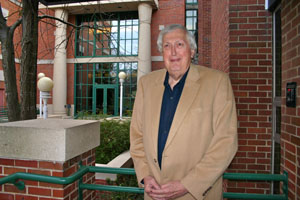 It’s not often that a dozen of a community’s published authors gather for a book launch, but that’s exactly what happened when retired University of Mississippi pharmacy professor Ronald F. Borne’s latest book made its debut.

“It was a damn magical night,” said Neil White, who published Borne’s Beginnings & Ends, a compilation of the first and last lines of works penned by 29 Oxford writers whom Borne considers friends or acquaintances.

“At the launch event, we had 12 of Oxford’s best contemporary writers reading their opening and closing,” White said. “It just so happened that each one also spent a moment talking about how writers like Barry Hannah and Larry Brown and Willie Morris impacted their work and lives.”

“It was a you-had-to-be-there kind of evening, many leaving with a sigh, saying, ‘Oh, that was fun!'” wrote Square Books proprietor Richard Howorth in his November post-event blog.

“It was a lot of fun. It was short and sweet, and, of course, every writer said something nice about me,” said Borne, grinning widely. “But they not only read from their works; they also told great stories.”

Among them were Hoar, who Borne calls “Oxford’s senior writer-in-residence,” and Fennelly, who he calls “Oxford’s poet laureate.” But it was Borne’s longtime friend, the late Willie Morris – who penned such memorable books as My Dog Skip, North Toward Home, Taps, The Courting of Marcus Dupree and The Ghosts of Mississippi – from whom Borne got the idea for Beginnings & Ends.

“He knew I was a frustrated writer,” said Borne, a medicinal chemist accustomed to writing in the precise style typical of scientists and their professional journals. “Willie told me once that a writer has to do the obvious. You must have a strong beginning, to keep people reading, and you must have a strong ending, to make them want to read more.”

To spark his own creativity, Borne began collecting the beginnings and endings of works by friends and acquaintances, then putting Morris’ advice into practice when writing grant proposals submitted to funding agencies, memos to faculty or reports to university administrators.

“It’s a major reason I received an NIH (National Institutes of Health) fellowship to study in Scotland,” he said.

By the time Borne, who describes himself as a collector, finished accumulating snippets from his acquaintances and friends, he amassed so many of them that he had to limit choices for his book to works of fiction, memoirs or creative narratives.

“I had to leave out, for example, works by historians such as David Sansing and works of poetry by John Crews,” he said. “Still, I was able to include 29 people I know.”

Among them are Davis Temple and Bob Magarian, who, like Borne, are medicinal chemists and have written several novels. Both Temple and Magarian received their Ph.D.s from Ole Miss.

Of course, before Borne could publish his collection, he had to get permission from each of the authors to include their copyrighted material.

“Everyone was so enthusiastic about the book,” Borne said. “They all said, ‘Thank you for including me.'”

Borne has penned two other books: 1936: The Year that Sports Changed the World and a biography of Hugh Clegg.

“1936 was the year we were coming out of the Great Depression and heading into World War II,” Borne said. “But it was also a year that sports influenced politics, and politics influenced sports.”

At the 1936 Summer Olympics, for example, Adolf Hitler was using the Berlin games to show the world a resurgent Nazi Germany, and his Nazi propaganda machine was touting Aryan racial superiority. But James Cleveland “Jesse” Owens, a black man born in the South, defeated several Germans and achieved international fame by winning four gold medals, a feat unequaled until Carl Lewis won gold medals in the same events in 1984.

And who, you ask, is Hugh Clegg? Borne asked that very question for years.

“I lived just down the street from the Oxford-University Airport, so I saw that sign designating Clegg Field for years,” Borne said. “But I never knew who Hugh Clegg was, so I started digging.”

Turns out, he said, that Clegg “was the No. 3 man at the FBI from 1926 to 1954 and was involved in the hunt for John Dillinger and other gangsters before, during and after the Great Depression. When Clegg left the FBI, he came to Ole Miss as (Chancellor) J.D. Williams’ executive assistant. So during the integration crises, he served as liaison between the university and state and federal governments.”

After completing these two book projects, Borne contacted White to talk about publishing the sports and Clegg books.

“He asked me to meet to see if I was interested in one or both,” said White, who is interested in the 1936 book and hopes to publish it in 2014. “Then he said he’s actually written a third one but didn’t want to muddy the waters at our first meeting by showing it to me.”

“I loved it,” White said. “I’m always looking for book projects that can be used or sold in a manner outside the traditional outlets. With all the talk about cultural and heritage tourism, I thought I could sell copies to our CVB (Convention and Visitors Bureau) and tourism council, thinking they could hand visitors a copy of this little book – one that really reflects the literary history of this town – rather than a coffee mug or pen.

“So, we spent a few weeks getting permission, designing the book and spreading the word. It’s been a fun project.”

Borne joined the UM School of Pharmacy faculty in 1968 and retired in 2004, although he taught part time until 2006. During his 38 years with Ole Miss, he collected academic titles like some people collect stamps: professor of medicinal chemistry, chair of medicinal chemistry, acting dean of the graduate school and vice chancellor for research. He also collected six of the school’s Pharmaceutical Sciences Teacher of the Year awards.

Inspired by the more than two-dozen writer denizens of Oxford and Ole Miss, Borne can be found late afternoons in an office in Faser Hall, working on a fourth book project, The Fundamentals of Medicinal Chemistry, which he hopes will one day become a definitive textbook for pharmacy students.

Borne sums up their influence this way: “Square Books is the pheromone that attracts writers to Oxford and Ole Miss, and Oxford is the catalyst that converts words of the mind to words on paper.”