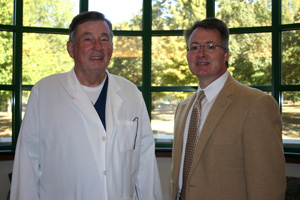 Because of his exceptional teaching talent and kind spirit, Thomas R. Brown’s influence on his students continues long after their classes with him are over.

“As a person, Dr. Brown is a wonderful friend, someone you can always call on for help, guidance and support,” said Burnis Breland (BSPh 74, MS 76), director of pharmacy at The Medical Center Inc. in Columbus, Ga. “As a professional and a scholar, he is the epitome of a mentor.”

Breland has many good things to say and remember about his former professor.

“He is an excellent teacher, a knowledgeable practitioner, and he motivates others to reach beyond their own personal goals,” Breland said. “He encourages others to look at issues from a broader perspective and challenges students and colleagues to strive to accomplish to the best of their ability. He influences and enables others through his work, collaboration and kindness.”

Brown, now professor emeritus, has been a member of UM’s pharmacy family for more than 40 years.

A Jackson native, he graduated from the pharmacy school in 1963. He practiced community pharmacy for a year before spending two years with Eli Lilly and Co. as a sales representative. He then served four years in Europe as a Medical Service Corps officer for the U.S. Army.

With the strong encouragement of his longtime friend and mentor Mickey Smith, now an F.A.P. Barnard Distinguished Professor Emeritus of Pharmacy Administration, Brown came back to Ole Miss to earn a master’s degree in hospital pharmacy after returning from Europe. He then went on to earn his doctoral degree from the University of Tennessee and began teaching in UM’s Department of Pharmacy Administration in fall 1970.

“As an active faculty member, my primary responsibility at the outset was to teach hospital pharmacy practice,” Brown said. “When we began our clinical program in the mid ’70s, I began to teach therapeutics, hospital pharmacy and active learning-based recitation courses.”

He served as chair of pharmacy administration from 1986 to 1992. During that time, he worked extensively on a research project dealing with adverse drug reaction reporting systems in Mississippi hospitals. He retired from the university in 1999.

Brown has published five books, and the American Society of Health-System Pharmacists recently highlighted two of them as the organization’s “Monthly Featured Products.”

Breland said that Brown is editor of “the most authoritative text on institutional pharmacy practice” and that he has greatly impacted the practice of health-system pharmacy through his professional work.

“He has also influenced and motivated many students and colleagues to become better practitioners, better leaders, better teachers and better community servants. I am proud to call him my mentor and friend,” Breland said.

Rachel Robinson, UM clinical assistant professor of pharmacy practice, first came to know Brown as her professor in 1977. Today, they are colleagues and teach two classes together.

“He can take a huge volume of information and condense it down,” she said. “He can bring the material to a level that everyone understands. He uses his work experience and makes it real. All of his students can relate to him.”

Even today, Robinson is still learning from Brown.

“He is still my mentor,” she said. “He is who I go to when I have questions. He is the person I run test questions by. I know he has the experience and the wisdom to tell me the truth.”

“Dr. Brown is easily in the top five pharmacists that have had a significant impact on my professional development,” Paul said. “He not only presented opportunities to students but also encouraged. He gave me the extra confidence I needed to achieve more and make choices to pursue leadership positions in national pharmacy organizations.”

Brown credits his family for much of his success. His wife, Bonnie, was UM’s associate registrar, and both of their sons, Dennis and Jeff, graduated from Ole Miss. Dennis earned his Pharm.D. in 1998 and is a pharmacist for Kroger. Jeff, who earned his bachelor’s in biological science in 2001, is a physician in Tupelo.

“It’s been a real joy to work with the faculty members who have been here over the period of time that I have,” Brown said. “I’ve always seen a passion in the pharmacy faculty here. They are trying to make sure that the students are getting the best opportunities in the classroom that they can. And that means a lot.”