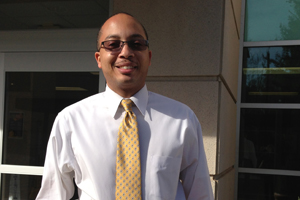 Montez Carter, 1998 pharmacy graduate, is the recipient of the 2013 Distinguished Alumni Award. He is president of St. Mary’s Good Samaritan Hospital in Greensboro, Ga. and vice president of operations for St. Mary’s Health Care System in Athens, Ga.

The University of Mississippi School of Pharmacy will honor three alumni for their outstanding careers and commitment to service during the school’s Alumni Weekend awards banquet this Saturday.

“These three individuals are wonderful examples of professional excellence within our alumni group,” said David D. Allen, the school’s dean. “All three of them have careers filled with accolades and achievement. They are, indeed, distinguished individuals and deserving of our recognition.”

Carter earned his doctor of pharmacy degree from Ole Miss in 1998 and later earned a master’s degree in business administration from the University of Alabama. Before joining St. Mary’s administrative team in 2010, he was director of pharmacy services, then associate director of performance improvement and patient support services at Greenwood Leflore Hospital in Greenwood. 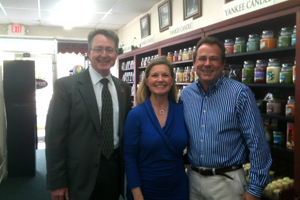 “I wanted to serve the pharmacy profession and healthcare in a different role, not just at the bedside but in an administrative capacity,” he said. “There are not enough pharmacists in hospital administration. As a pharmacist, there is a unique opportunity to balance both the business aspects and the clinical aspects of medicine.”

“The award recognizes someone who has distinguished himself or herself in some way, whether in practice, administration or community service throughout the years,” Ross said. “As I think about that, Montez is the first person who comes to mind. He has been extremely successful in practice and in his administrative roles, and he has taken on initiatives that have improved patient care while being engaged in his community. I think he truly embodies what it means to be a Distinguished Alumnus.”

Carter said that he was “pleasantly surprised” to learn he was chosen for the award.

“I am so appreciative that the School of Pharmacy thought enough of me to select me for the Distinguished Alumni Award,” Carter said. “It’s a humbling experience because I know that our school has graduated so many pharmacists who have made a great impact.”

The McKinneys, who both graduated from Ole Miss with bachelor’s degrees in pharmacy in 1986, were chosen to receive the Distinguished Service Award for providing care and medications to Gulf Coast residents during the aftermath of Hurricane Katrina in 2005.

After Katrina devastated the Mississippi Gulf Coast, the McKinneys did whatever they could to help patients get their medications, even when it meant resorting to filling prescriptions in the mud with a flashlight.

“Katrina was bad, and our customers and patients were in bad shape,” Wendy McKinney said. “The storm hit on Monday, we got back on Wednesday night and we had the store open at 10 a.m. on Thursday. People had no gas and there was no way to let anybody know that we were here. They were lined up at the back door.

“If you could prove in any shape, form or fashion what your medicine was, we filled it. They got a week’s worth of medicine – maintenance meds only – and we logged it in a notebook. There was no computer, no typewriter, and there was a generator running the refrigerator. No one paid for anything, because we couldn’t bill their insurance, we couldn’t tell what their insurance was. We didn’t charge anybody anything.”

John McKinney said that such service is integral to pharmacists.

“You have to have a heart of service to be a pharmacist,” John McKinney said. “That’s why you go into the profession – to help people. One of our goals every day is to make a difference in someone’s life, whether it’s a patient, employee or a total stranger. I think as a pharmacist you have so many opportunities to help people, and as a small business owner those opportunities grow even more.”

Wendy McKinney is a member of the Pharmacy Alumni Chapter board. John McKinney is currently serving on the School of Pharmacy’s Board of Visitors and has been a preceptor for more than 20 years.

“I love working with students and observing how they’ve changed over the years,” John McKinney said. “Students today do so much more hands-on and clinical work than when we were in school, and it’s amazing to see what they can do and what they know. I think the future of pharmacy is in good hands.”

Jillian Foster, president of the Pharmacy Alumni Chapter board and director of pharmacy services at Baptist Memorial Hospital-North Mississippi, nominated the McKinneys for the award.

“A couple of terms come to mind when I think about the McKinneys,” Foster said. “Consistency and commitment, in their local city and community, as well our state and our profession. John and Wendy were public servants before Katrina, but especially during and after the storm. They work so hard on the beautification of Moss Point and have put so much effort into their stores and how the community receives them. That just speaks volumes to their character.”

Recipients of the Distinguished Alumni Award and Distinguished Service Award are selected based on professional accomplishments and service.