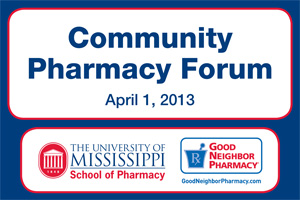 The Community Pharmacy Forum will be held on April 1 in Jackson.

The University of Mississippi School of Pharmacy will host its first Community Pharmacy Forum to bring pharmacists, educators and students together to discuss the state of community pharmacy April 1 in Jackson.

Sponsored by Good Neighbor Pharmacy, the event will be held on the UM Medical Center campus in the Pharmacy Building’s Wells Auditorium. The session will begin at 8 a.m. and conclude with lunch at 1 p.m.

“We are so pleased to host our first Community Pharmacy Forum,” said David D. Allen, the school’s dean. “We have a lot of interesting and current topics to cover in our discussions and I look forward to participating. I am especially thankful for Good Neighbor Pharmacy’s sponsorship to make this event a reality.”

Mike Quick, national vice president for Good Neighbor Pharmacy Development, believes that it is imperative to get students interested in community pharmacy.

“One of the biggest problems for independent pharmacy is that our many of our current owners are getting to the age of retirement,” Quick said. “We need to get our young pharmacists interested in community pharmacy.”

Quick said that there are a few strategies to discuss on how to interest these young pharmacists.

“We’d like to look at having junior partners,” he said. “In other words, when a pharmacist is getting ready to graduate, he would go to work at an independent store as a junior partner. When that owner is ready to retire, he would be in a great position to buy the pharmacy.”

The morning’s events will include roundtable discussions followed by a panel of educators, practitioners and a student pharmacist.

“My idea is that the goal of the forum is to create better communication between the School of Pharmacy and those who currently work in community pharmacy,” said Cheryl Sudduth, a 1981 alumna and pharmacist at Funderburk’s Pharmacy in Hernando. “I know that community pharmacy is facing lots of challenges as far as maintaining a vital niche in the marketplace, and being able to talk to people that are actually on the front lines will help the school better prepare the students.”

The discussion topics range from innovations in community pharmacy to the role of the pharmacist in 10 years.

Chris McLaurin, a 1997 alumnus and pharmacy supervisor for Walgreens, will serve as one of the forum’s panelists.

“Through this first-ever forum, I plan to share my visions of the future of our community profession as well as listen to the various ideas from the other panelists,” McLaurin said. “By having an open panel discussion, we should be able to coalesce our ideas to formulate solid, actionable plans to drive toward goals that benefit the entire profession and not just one or two facets of it. I’m very excited at the possibilities.”

Allen said he is also hopeful that the event will result in meaningful conversation about pharmacy today.

“Community pharmacy is the foundation of my career and an integral part of the profession of pharmacy,” Allen said. “It is imperative that we take some time to sit down as a group to work together and formulate ideas.”

For more information on the event, or to RSVP, contact Tricia Pierre at tpierre@olemiss.edu.