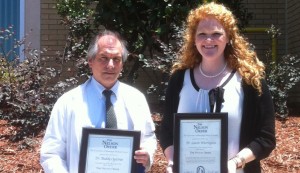 For their ongoing commitment to students and pharmacy education, two School of Pharmacy faculty members were in May inducted into the Norman C. Nelson Order of Teaching Excellence at the University of Mississippi Medical Center.

The 2012 inductees were honored at a luncheon with Dr. Nelson, vice chancellor emeritus for health affairs, in the student union at UMMC, which bears his name. The recipients were also recognized during UMMC’s May commencement ceremony, and a plaque bearing their names hangs on the Norman C. Nelson Wall of Honor.

The Nelson Order was created to recognize outstanding teachers in all of the professional schools at UMMC.