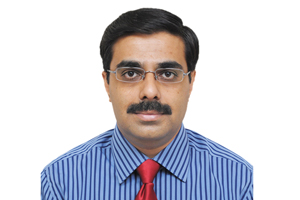 Since earning his Ph.D. in 2003, Murthy has published more than 75 research papers about drug-delivery methods. Forty of those papers have been published since joining the Ole Miss faculty six years ago.

Dermatokinetics “is all about what happens when you deliver a drug into skin and what skin does to the drugs,” Murthy said. “It focuses on pharmacokinetics of a drug in the skin.”

Delivering drugs through the nail plate is useful for treating fungal infections and nail psoriasis.

“Nail diseases are a very prevalent problem,” Murthy said. “Because of this, I started exploring ways to treat nail diseases topically rather than orally.”

Murthy collaborated on the second book with Howard Maibach, a renowned dermatologist from the University of California at San Francisco, who contacted him about working together on the project.

“I was honored to work with him,” Murthy said. “It was a privilege.”

In addition to delivering drugs through skin and nails, Murthy is interested in delivering them intranasally.

“We are working on developing noninvasive and painless technologies for delivering medications,” he said. “We believe these technologies could potentially improve the efficacy of disease treatments and help improve the quality of life of patients.”

Murthy has received four National Institutes of Health grants and two pharmaceutical industry grants in the past six years to work on novel approaches to treat anemia, central nervous system disorders and onychomycosis (fungal infection of the nail). He was recently awarded an Exploratory/Developmental Research Grant from NIH to conduct research on intranasal delivery of drugs to the cerebrospinal fluid for chronic pain management.

Murthy, who joined the Ole Miss School of Pharmacy in 2006, is an associate professor of pharmaceutics and a research associate professor in the Research Institute of Pharmaceutical Sciences. But his research career did not begin in Mississippi. It began in his home country of India, where Murthy first discovered his passion for scientific research.

After earning master’s and doctoral degrees in pharmaceutics from Bangalore University in India, Murthy moved to the United States to pursue post-doctoral work at the Roswell Park Cancer Institute in Buffalo, N.Y. There, he worked on advanced drug-delivery technologies, then moved to the University of Mississippi, where he formed a research group to continue working on similar projects.

“I completed my M.S. and Ph.D. in pharmaceutics, but my post-doctoral research was in biophysics,” he said. “They are very different fields. In my research lab right now, we work on biophysical approaches to drug delivery. It’s a kind of interdisciplinary approach to drug delivery.”

Murthy is pleased with his move to the University of Mississippi’s pharmacy school, which, he said, is an institution “that strongly supports research.”

“There are many research opportunities in the School of Pharmacy,” he said. “I genuinely feel that the school and the university are very supportive of me. It’s a great place to be. Dr. Repka, chair of my department, and other pharmaceutics faculty members are wonderful to work with.”

Former Ph.D. student Srinivasa Murthy Sammeta, for example, is a senior scientist at Watson Pharmaceuticals in Salt Lake City and credits much of his success to Murthy’s guidance.

“Dr. Murthy infuses his students with enthusiasm and a desire to work hard,” Sammeta said. “It’s due to Dr. Murthy’s encouragement and support that I was able to publish eight research articles in well-respected journals. The progress I made during my association with him has transformed me into a confident and ambitious person, and it reflects the interest, support and utmost care that Dr. Murthy takes in the professional development of his students.”

Shivakumar Nanjappa, once a post-doctoral scientist in Murthy’s lab, is chair of pharmaceutics at Karnatak Lingayat Education University.

“Dr. Murthy is truly an inspiring person,” Shivakumar said. “His creativity, hard work and perseverance have made him successful.”

Murthy’s books, which are now circulating around the world, are bringing him international recognition. He is pleased with that and looks forward to continuing his research and mentoring students at Ole Miss.

“It feels great,” he said. “It’s great to be working with the right group of scientists and researchers. It is wonderful that our administration has a vision for research and a plan for advancing the School of Pharmacy. There are a lot of things going on, and I think there are great things to come.”