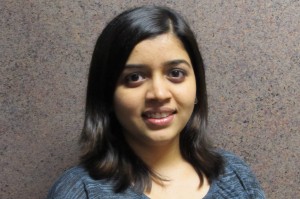 Krutika Jariwala, a UM graduate student pursing a Ph.D. in pharmacy administration, recently published a paper on electronic prescribing in the Journal of the American Medical Informatics Association.

“I am extremely thrilled about the acceptance of my paper and am honored to have it published in such a competitive and prestigious journal,” Jariwala said.

The paper, “Factors that Physicians Find Encouraging and Discouraging About Electronic Prescribing: A Quantitative Study,” provides insight into physicians’ opinions about e-prescribing, which allows physicians to electronically write and send prescriptions to pharmacies.

“We found that physicians who had just started e-prescribing were faced with several problems related to the process of understanding and learning the new system,” Jariwala said. “However, physicians with more e-prescribing experience were more comfortable with e-prescribing and the workflow redesign associated with adopting it.”

The paper used data from Jariwala’s thesis project for her master’s degree in pharmacy administration. The data originated from 443 physicians’ survey responses. This is the second paper Jariwala has published from her thesis, which was supported by a Graduate Student Research Grant sponsored by the UM Office of Research and Sponsored Programs and the UM Graduate Student Council.

Holmes, who is a co-author on the paper, said that e-prescribing has many implications for pharmacists. E-prescribing can generate more legible prescriptions and allow physicians to more easily access insurance and drug interaction information, which can avoid time-consuming clarification calls by the pharmacist to the physician, she said.

“This does not mean that e-prescriptions do not carry the potential for error, however, as physicians have reported the potential to choose the wrong drug from a pull-down menu on their computer or hand-held device,” she said. “Another implication for pharmacy is the effect of electronic prescribing on ‘first fill adherence,’ (whether or not patients go to the pharmacy to pick up new medications they are taking for the first time). How a prescriber communicates to a patient that he or she has an e-prescription at the pharmacy without the physical reminder of a paper prescription, may really matter.”

Jariwala said that though e-prescribing is becoming more common in health care, there is a long way to go before it is adopted widely by physicians.

“Our study is just an initial step in understanding physicians’ perspectives on what they find to be good and bad about e-prescribing,” she said. “We hope that this paper will help readers understand that with e-prescribing, and perhaps any type of new health care technology, new adopters or soon-to-be adopters of that technology may experience some ‘fear of the unknown’ initially, but with time, may become more confident and better able to adapt to the new technology,” she said.

Jariwala credits School of Pharmacy professors for their assistance with the project.

“I would like to express my gratitude to Dr. Holmes,” she said. “Without her support and mentoring, I don’t think I could have reached this stage. I would like to thank the rest of my thesis committee, Dr. Ben Banahan and Dr. David McCaffrey, for their time, insightful comments and interest in this research. I would also like to thank Dr. Rahul Khanna and Dr. Donna West-Strum for their constant encouragement and mentoring.”