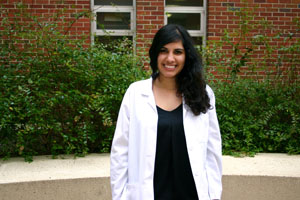 Sidra Sarker, in only her first professional year of pharmacy school at the University of Mississippi, will advance to a national patient counseling competition after winning a local competition sponsored by the American Pharmacists Association-Academy of Student Pharmacists.

“It is truly a great honor to be representing the School of Pharmacy in a national competition,” Sarker said. “I never imagined that I would qualify for this competition, but I am so grateful to have the opportunity. I know that I have significantly less experience in the field of patient counseling as compared to other students, but I am glad that my enthusiasm for the patient encounter can be observed.”

Sarker, an Oxford native, will be competing in the 2013 APhA-ASP National Patient Counseling Competition during the APhA Annual Meeting and Exposition, which runs March 1-4.

“I am very excited about the competition,” Sarker said. “Patient counseling is one of my favorite aspects of skills lab, so I can’t wait to compete in this aspect of pharmacy.”

Sarker was selected to compete after winning a local patient counseling competition at the pharmacy school.

“I was impressed with Sidra’s ability to turn a counseling session into a conversation,” said Joeseph Dikun, graduate assistant in the Department of Administration and APhA-ASP co-adviser. “It didn’t feel like she was checking off a list of required elements, but rather she clearly is developing a personal style to approaching patient counseling opportunities.”

During the local competition, students were given a prescription and 10 minutes to research pertinent information about the drug. Their resulting performances were videotaped and judged equally on content and presentation.

Sarker is working hard to prepare herself for the next phase of competition.

Dikun is confident that Sarker will represent the School of Pharmacy well.

“Sidra will do an excellent job,” he said. “She was incredibly poised during the local competition and I would expect nothing less. She has worked hard to ensure that she understands the format, expectations and rigor of the national competition.”

Dikun hopes that the opportunity will not only benefit Sarker but also her classmates, he said.

“I hope (Sarker) brings her experience back to campus, encouraging her classmates to continue in their professional development of such skills that will help their future patients make the best use of their medications,” he said.