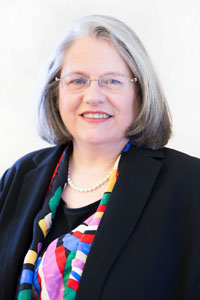 Lois Margaret Nora, president and CEO of the American Board of Medical Specialties, is to deliver the 2013 Charles W. Hartman Memorial Lecture on April 12 at the University of Mississippi.

Sponsored by the UM School of Pharmacy, the 2013 Hartman Memorial Lecture begins at noon in the Gertrude C. Ford Center for the Performing Arts. Nora’s lecture is titled, “Leadership During Transformation: An Imperative for Healthcare Professionals.”

“The School of Pharmacy is very fortunate to have Dr. Nora as our 2013 Hartman Lecturer,” said David D. Allen, dean of the pharmacy school. “Dr. Nora is one of my longtime friends and mentors. She is able to give valuable insight into the role of pharmacy in health care, and her lecture is sure to be enlightening.”

ABMS, Nora’s current organization, is a nonprofit organization that supports 24 medical member boards in developing and implementing educational and professional standards to certify physician specialties, as well as to encourage lifelong learning and assessment.

Prior to serving as president and CEO of ABMS, Nora served as interim president and dean of the Commonwealth Medical College in Scranton, Pa. From 2002 to 2010, Nora was president and dean of medicine at Northeast Ohio Medical University. She also served as associate dean of academic affairs and administration and professor of neurology at the University of Kentucky College of Medicine, and assistant dean and assistant professor of neurology at Rush Medical College.

Nora’s scholarly work focuses on issues in medical education and issues at the intersection of law and medicine. Her honors include the President’s Recognition Award from the American Medical Women’s Association, the Merrel Flair Award in Medical Education from the Association of American Medical Colleges Group on Educational Affairs and the Phillips Medal of Public Service from the Ohio University College of Osteopathic Medicine. Nora is board-certified in neurology by the American Board of Psychiatry and Neurology.

“My lecture will present the changing landscape for health care and pharmacy, my opinion on the importance of pharmacy being a profession in the traditional sense of that word, and the important leadership role that today’s students will play going forward,” Nora said.

The Hartman Lecture was established at UM in 1973 to honor the late Charles W. Hartman, who was dean of the pharmacy school from 1961 until his death in 1970.

Nora said she drew inspiration from Hartman for her lecture.

“Dean Hartman is a wonderful example of leadership at the School of Pharmacy,” she said. “He is an example of the power of an individual to make a difference.”

For more information or assistance related to a disability, please contact Erin Garrett at enparson@olemiss.edu or 662-915-1015.