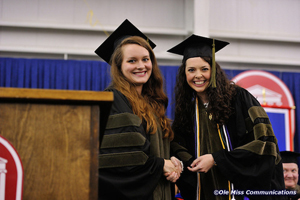 Miranda Jordan (left) and Laura Luther were inducted into the school’s Hall of Fame during commencement ceremonies.

Two Doctor of Pharmacy graduates have been selected by their peers to be inducted into the University of Mississippi School of Pharmacy Hall of Fame.

Miranda Jordan of Jackson and Laura Luther of Hattiesburg were inducted into the Hall of Fame during recent commencement ceremonies. They were recognized for their significant scholastic and professional contributions to the school.

Jordan is president of the university’s graduating Doctor of Pharmacy class and has served as class president for the past three years. She was the events coordinator and then director of the Christian Pharmacy Fellowship International. She also helped organize an Operation Heart event for the American Pharmacists Association.

Jordan is a member of the pharmacy fraternity Phi Delta Chi, pharmacy leadership society Phi Lambda Sigma and the Mississippi Society of Health-System Pharmacists. She was selected by her peers to receive the school’s Shawn Bankston Award as well as other awards for outstanding leadership and service.

“There could not be a better candidate for the Hall of Fame,” Luther said of her classmate. “Miranda has done a tremendous job as our class president. Not only is she an outstanding leader, but she also strives to maintain a sense of balance in her life. She studies hard, but she also still makes time to teach yoga and have regular hangout time with friends.

“She is such an encourager that no one can leave a conversation with her without feeling more confident. She is also passionate about providing the best care possible to patients, and I am looking forward to seeing the impact she will make on pharmacy practice.”

Upon graduation, Jordan will serve as a pharmacy resident at the Central Arkansas Veterans Healthcare System.

Luther was a former pharmacy student body president, and just completed a term as president of Rho Chi, a pharmacy academic honor society. She is a member of Phi Lambda Sigma, the American Pharmacists Association and the American Society of Health-System Pharmacists.

Luther received a Taylor Medal from the university and is also a member of Phi Kappa Phi honor society. She was an inaugural recipient of the pharmacy school’s Ainsworth Leadership Scholarship.

“Laura has rare qualities in that she is so consistently positive and always exhibits a strong work ethic,” said Jordan. “Her cheery smile and gentle spirit fueled a contagious optimism which helped build enthusiasm for activities within the pharmacy school.

“These character traits and Laura’s strong Christian faith have helped her success and left a permanent mark on the faculty, administrators and students she encountered.”
Upon graduation, Luther will serve as a pharmacy resident at the Memphis Veterans Affairs Medical Center.