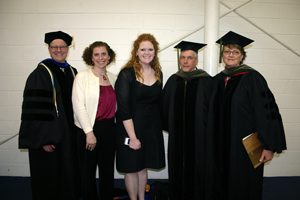 University of Mississippi School of Pharmacy classes recognized their outstanding teachers and preceptors during awards day and commencement ceremonies this spring.

Students in the first year of the professional pharmacy program, or PY1, graduating with Bachelor of Science in Pharmaceutical Sciences degrees May 11 chose pharmacy administration professor David J. McCaffrey III, one of the pharmacy school’s Distinguished Teaching Scholars, as their Teacher of the Year.

The PY2 class chose Tracy A. Brooks, assistant professor of pharmacology, as its Teacher of the Year, and PY3 students selected Laurie E. Warrington, clinical assistant professor of pharmacy practice, as their Teacher of the Year. Brooks and Warrington received their awards during the pharmacy school’s awards day program in April.

McCaffrey teaches the course Social and Behavioral Aspects of Pharmacy Practice to PY1 students. He received an Outstanding Faculty Advising Certificate of Merit from the National Academic Advising Association last fall, the University’s Faculty Excellence in Advising Award in 2011 and the School of Pharmacy’s Faculty Service Award in 2010. He was also recognized by this year’s graduating PharmD students as their teacher of the year when they completed their BSPS degrees in 2010.

“Throughout my tenure at Ole Miss, Dr. McCaffrey has been my support system and the one faculty member I knew I could go to with any question or concern,” said PY1 student Mary Claire Jarrell of Saltillo. “Dr. McCaffrey loves his job and the people (by whom) he is surrounded. He makes his students feel like they are the most important thing in his day.”

Dickey and Ogletree, who provide students with introductory and advanced practice experiences (aka IPPEs and APPEs) at the UM Medical Center in Jackson, have been honored by pharmacy students before. Dickey received the PY4 students’ IPPE Preceptor of the Year Award in 2009, while Ogletree received the APPE award in 2011. Students also chose Dickey as their Teacher of the Year in 1999 and ’03, and Ogletree for the same honor in 2004, ’05 and ’06.

“Despite the extremely busy and fast-paced environment in the emergency department, Dr. Dickey always took the time to thoroughly explain and discuss everything that we encountered,” said Pharm.D. class president Miranda Jordan of Jackson. “She helps polish students’ clinical knowledge and skills to make sure they are prepared to be effective clinicians who communicate well with patients and other health care providers.”

As coordinator of Drug Information and Investigational Drugs at UMMC, “Dr. Ogletree taught us how to be a great drug information source,” Jordan said. “But his preceptorship did not end when IPPEs were over. He continually helps students seeking his advice and guidance on everything from finding scientific literature to constructing a research project, or beginning a job search. His greatest quality is belief in his students and being there for them.”

Brooks, who joined UM’s pharmacy faculty in fall 2011, co-teaches Basic and Clinical Pharmacology I and II, and teaches the elective Fundamentals of Oncology. Her research interests include identifying and characterizing new targets for anticancer therapies.

“Dr. Brooks is an excellent educator and researcher with loads of personality,” said PY2 student Lacey Gilmore of Sebastopol. “Her research is interesting and important, and she always keeps us engaged in class. She is very passionate about what she does, and I am very lucky to have had her as a professor.”

Warrington, who also received the PY3 class award in 2011 and 2012, has an ambulatory care practice and facilitates problem-based learning groups for third-year students. In addition, she is heavily involved in pharmacy students’ service projects at the UM Medical Center and in the Jackson area.

“Dr. Warrington is a very effective teacher who consistently makes herself available to her students and warmly welcomes them with her cheery smile,” Jordan said.