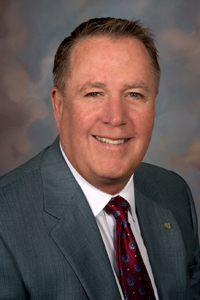 Hosted by medicinal chemistry faculty, the April 15 lecture is set for 11 a.m. in Room 2066 of the Thad Cochran Research Center. It is free and open to the public. Ireland plans to discuss “Three Decades of Evolution in an Academic Drug Discovery Program: Then and Now.”

Ireland has established himself as a world leader in natural product drug discovery during his nearly 30 years at the University of Utah. His research has focused on the discovery of antitumor agents from natural product sources including marine invertebrate animals, tropical plants and fungi.

He has published more than 170 peer-reviewed research articles, eight book chapters and five patents. He has been invited to speak at numerous national and international symposia on natural products research and cancer chemotherapeutics.

Ireland is an Alfred P. Sloan Fellow, an American Society of Pharmacognosy Fellow, a 2008 short-term Fellow of the Japan Society for the Promotion of Science and an Honorary Research Fellow of the Queensland Museum Biodiversity Program. He has been given numerous awards, including a National Institutes of Health Career Development Award, the 2007 University of Utah Distinguished Scholarly and Creative Research Award, the 10th Webster Sibilsky Award for Contributions to the Field of Medicinal Chemistry and the 2007 Utah Governor’s Medal for Science and Technology.

“Dr. Ireland has extensively studied the chemistry of marine invertebrates, which have proven to be a prolific source of diverse chemical structures with potential anticancer effects,” Cutler said.

The lecture was established in 2004 as a way of recognizing Ronald F. Borne, a longtime medicinal chemistry professor, and his contributions to the department and the university. Borne was a classroom favorite of students for many years and has been recognized on numerous occasions for his teaching and research excellence. He received the university’s 1972 Elsie M. Hood Teacher of the Year Award and 1996 Faculty Achievement Award. He was also named by the Council for the Advancement and Support of Education as the Mississippi Professor of the Year in 1992.

For more information on the lecture or for assistance related to a disability, contact Casey Stauber at cstauber@olemiss.edu or 662-915-7026.