A part of the University of Mississippi School of Pharmacy’s National Center for Natural Products Research, the Maynard W. Quimby Medicinal Plant Garden houses over 1,000 medicinal plants from all geographic regions of the world. 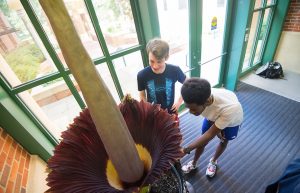 One of those plants is the titan arum (Amorphophallus titanum), also known as the “corpse flower” due to the distinct scent it produces during its bloom. The smell from the flower entices insects for pollination.

The flower is a rare sight, as it takes five or more years for the bloom to open. Once opened, it will close approximately 24-36 hours later.

A native of Indonesia, the University of Mississippi had its third titan arum bloom in June 2018. Prior to that, the garden saw two blooms within weeks of each other in 2014. 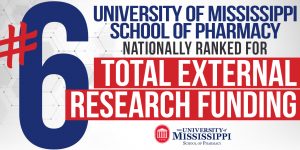