OXFORD, Miss. — Samir Ross, professor of pharmacognosy in the Department of BioMolecular Sciences and research professor in the Research Institute of Pharmaceutical Sciences at the University of Mississippi, was recognized as Honorable Professor and awarded a Gold Medal from Asfendiyarov National Kazakh Medical University in Almaty, Kazakhstan.

The honor was presented to Ross for scientific collaboration with the Kazakh pharmacy school for almost a decade, which includes giving seminars, workshops and supervising 10 Ph.D. graduate students both abroad and in Mississippi. The Gold Medal is the institution’s highest honor. 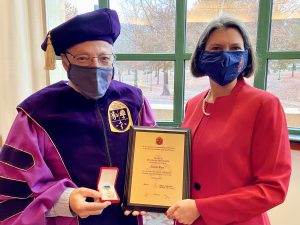 “I feel very happy and honored to receive such recognition,” Ross said.

Ross has produced over 350 publications and 12 patents during the course of his 40-plus year career in natural products research and drug discovery.

“Dr. Ross has made significant contributions as a scholar, leader and researcher,” said Ikhlas Khan, director of the National Center for Natural Products Research. “Many of his students conduct their own influential research, and that is a reflection of the impact and passion he brings to the field.”

“We are so proud of Dr. Ross, both for his own research as well as this important collaboration and mentoring of students,” said Donna Strum, interim dean of the UM School of Pharmacy. “I congratulate him on this well-deserved recognition.”

His other awards include a Silver Medal from the University of Veterinary and Pharmaceutical Sciences Brno in the Czech Republic in 2013 and the UM School of Pharmacy’s Faculty Research Award in 2009.