This is the second of two entries from University of Mississippi School of Pharmacy students who participated in the International Pharmaceutical Students’ Federation Student Exchange Program through the American Pharmacists Association Academy of Student Pharmacists.

Sophie Durham, a second-year student pharmacist from Germantown, Tennessee, traveled to Hungary this summer. Read more about her journey below. 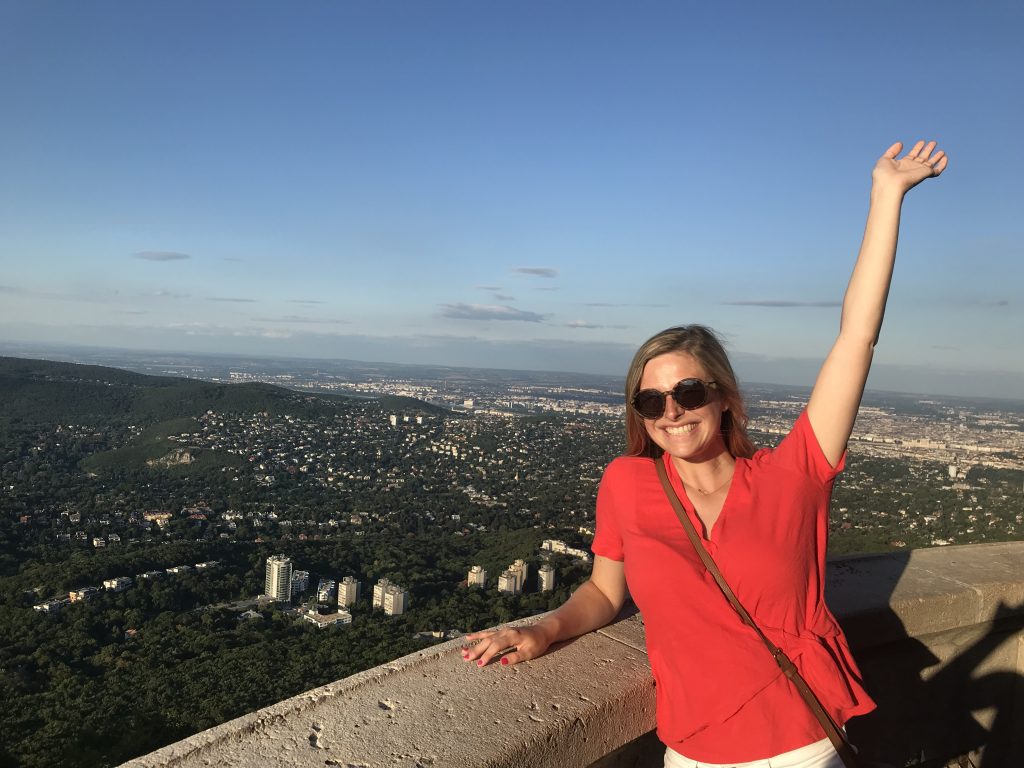 Sophie Durham shows off the city views during her trip to Hungary. Photo from Sophie Durham.

I had the opportunity to do research in the pharmaceutical technology department at Semmelweis University in Budapest, Hungary, in July. During my three weeks at the university, I spent each week in a different lab within the department. These rotations allowed me to gain a broad overview of the department and work with pharmacy students from around the world.

I spent the first week in the chemistry lab experimenting with different modified release dosage forms, such as microcapsules and liposomes. We explored the differences between delayed release, sustained release and pulsative release formulations. After producing the capsules, we performed a dissolution test using the basket method to mimic the conditions of the stomach and determine how the final product is absorbed after ingestion. It was interesting to see the concepts we discussed in pharmaceutics and calculations classes in practice. 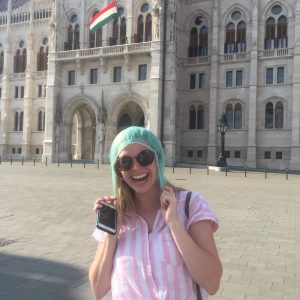 Durham poses in front of the Hungarian Parliament Building. Photo from Sophie Durham.

The second week, my lab partner and I moved to the infusion lab where we prepared different parenteral solutions according to the guidelines published in the Hungarian Pharmacopeia. We spent the second half of the week preparing creams, ointments, powders and suppositories. I learned that all community pharmacists in Hungary are required to compound these formulations in their pharmacies. Magistral preparation, or individualized medicine prepared by a pharmacist for a specific patient, is very important in Hungarian pharmacies.

During the final week of my internship, I worked in the pilot lab. The machines in this lab mimicked the equipment used to develop and produce drugs in industry. We used lots of different kinds of equipment, such as 3D printers, tablet press machines and sugar coating machines. We spent the last day performing in-vitro tests to test the hardness, friability, content uniformity, weight uniformity and dissolution of the tablets.

We spent the weekends traveling to different towns around Hungary and Vienna, Austria. My favorite city we visited was located on Lake Balaton, a popular Hungarian summer destination. We spent the days relaxing by the water and spent the nights exploring the town. We traveled by boat to another city on the lake that is known for its lavender fields. There, we enjoyed lavender ice cream, soaps and lotions.

Budapest is a beautiful city divided by the Danube River. Buda lies on one side of the river, while Pest lies on the other side of the river. My favorite place to visit in Budapest was the Széchenyi Chain Bridge because it connects the two sides of Budapest. It allowed me to experience the calm of Buda while absorbing the vibrance of Pest at the same time. 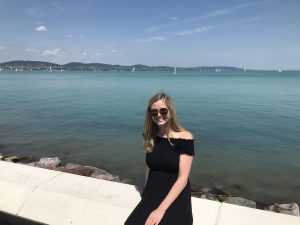 Durham smiles for the camera with Lake Balaton in the background. Photo from Sophie Durham.

The best part of the entire trip were the long-lasting friendships I made with students from countries across Europe and Africa. We spent our afternoons together hiking to the best views of Budapest, devouring the delicious local cuisine and sharing many laughs. As the only American, I spent a lot of time learning phrases in other languages. I was completely astonished that one of our professors taught pharmacy classes in Hungarian, German and English. I also learned a lot about their traditions, schools and beliefs. I gained 15 new friends and look forward to visiting them in their home countries!

I would encourage anyone interested in traveling, pharmacy and adventure to apply to the Student Exchange Program. I could not have asked for a better experience. I really enjoyed the freedom and independence of traveling alone. The hosts were very inviting and friendly and helped me gain so much from my experience. I learned the importance of clear communication and adaptability, which are skills that I can employ in my future pharmacy practice here in the United States. A month abroad wasn’t enough for me, and I can’t wait until my next adventure!